In Siddhant's throwback video, he can be seen dancing his heart out along with Sushant Singh Rajput 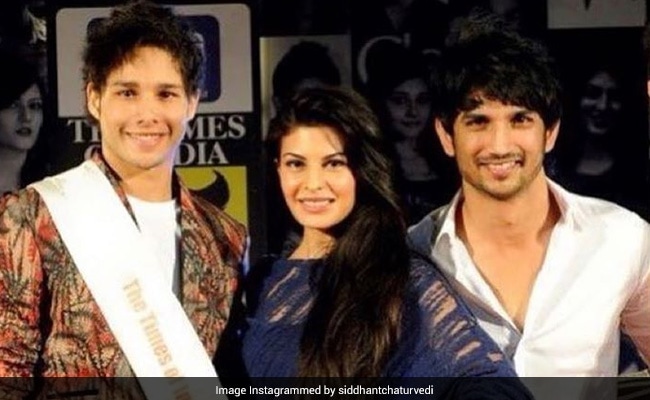 Siddhant, Jacqueline and Sushant in a throwback photo (courtesy siddhantchaturvedi)

Siddhant Chaturvedi, who shot to fame after starring in Gully Boy, shared a throwback video on Thursday, remembering late actor Sushant Singh Rajput, who died in June. In his post, Siddhant revealed that when he was in college, he won a National Talent Hunt in 2012, which sort of marked the beginning of his career as an actor. What also made it a milestone moment is that Siddhant got to celebrate his big win with Sushant Singh Rajput, who was a special guest along with actress Jacqueline Fernandez, at the event. In Siddhant's throwback video, he can be seen dancing his heart out along with Sushant Singh Rajput - the duo set the stage on fire, grooving to Chikni Chameli.

Here's the emotional note Siddhant attached to his video: "Jeeta main, nache hum dono... mera confidence uske baad ufff! Us raat soye nahi main aur mera parivaar... mera naam goonja stage pe, wo bhi Sushant Singh Rajput ki awaaz mein! wah! Mummy Papa ko laga ki kuch toh baat hogi mujh mein bhi... CA chhoro beta, hero bante hain! Permission mil gai (I was the winner but both of us danced. Me and my family didn't sleep all night that day. My name was announced on stage and that too in the voice of Sushant Singh Rajput. My parents thought there must be something in me... let your CA course be, let's be a hero. I got permission)."

On the day of Sushant Singh Rajput's death on June 14, Siddhant remembered the late actor with this memory from the National Talent Hunt in 2012 and wrote an emotional note: "Yahi se mera safar shuru hua tha, aur aap usme hamesha rahengey bhai (My journey started here and you will always be part of it.)"

Siddhant Chaturvedi became a much discussed name after his stunning performance in Ranveer Singh and Alia Bhatt's Gully Boy. His upcoming films include Phone Bhoot and Bunty Aur Babli 2, a remake of 2005 film Bunty Aur Babli. The actor has also featured in shows such as Life Sahi Hai and Inside Edge.