Shruti Haasan, Who Was Dating Michael Corsale, On Life After Break-Up: 'I Always Look For That One Great Love'

Shruti Haasan said, "I have no regrets. It was overall a good experience for me." 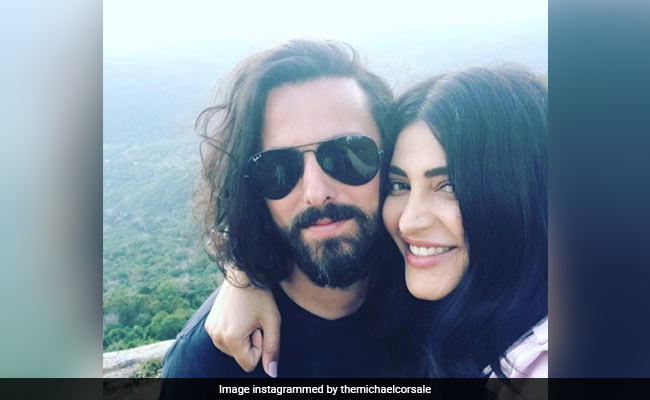 Actress Shruti Haasan, who was dating Michael Corsale, opened up about her personal life on VOOT's Feet Up with the Stars Telugu, which is hosted by Lakshmi Manchu and said she's on a lookout for 'that one great love,' reported news agency IANS. Shruti Hasaan told Lakshmi Manchu that she has been in 'only one' relationship all her life and that it was a 'very good experience for her.' On the show, Lakshmi Manchu asked Shruti how she felt about falling in love at the start of her career, to which she replied, "I was the cool type. I was very innocent and everyone would boss around me. I am a very emotional person that's why they could take over. I would say, it was a very good experience for me."

"Even now there is no formula. Good people are good at good times and the same people are bad at times. But I have no regrets. It was overall a good experience for me. I have learnt a lot and it was a learning experience. But I always look for that one great love and I will be happy to announce that this is the one I have been waiting for," she added.

Shruti Haasan and Michael Corsale were dating for a few years before they started documenting their relationship on social media from 2016. Shruti shuttled between Los Angeles and India while Michael also frequently visited India to hang out with Shruti. However, in April, a post shared by Michael Corsale triggered reports of their break-up. He shared a picture of himself with Shruti and wrote, "This young lady will always be my best mate. So grateful to always have her as a friend. Luv ya gal."

This young lady will always be my best mate. So grateful to always have her as a friend. Luv ya gal

Speaking about her expectations from her relationships, "It's not a romantic cinema love. We know we are in cinema. Honestly, it's between two people who grow together for each other. World is full of judgement, so we should be able to understand and communicate with each other."