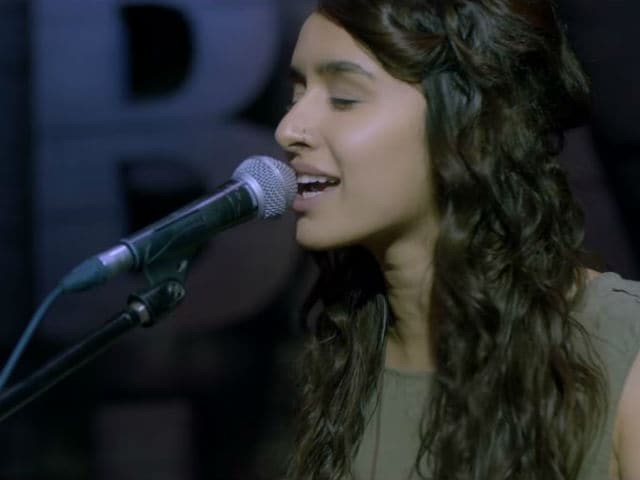 A still from Tere Mere Dil

New Delhi: For Shraddha Kapoor, an alternate career in singing doesn't seem like a far-fetched dream. The actress, who has proved her singing prowess in the past, easily stuns with her rendition of the new track from Rock On 2 titled Tere Mere Dil.

The video song, which was unveiled by the official handle of the film on Twitter on Thursday morning, has been since shared by the whole ensemble cast of the film, which includes Rock On newbies Shraddha and Shashank Arora, along with the original band Magik - Farhan Akhtar, Arjun Rampal and Purab Kohli.

With two new band-members in tow, the sound of Magik is distinctly different this time around. Rock On 2, however, is nothing short of a revelation for Shraddha fans, just as the original was for actor-filmmaker Farhan.

With the lilting tune by Shankar-Ehsaan-Loy and meaningful lyrics by Javed Akhtar, this electro-rock number is far removed from the other tracks of the film, especially youth anthem Jaago, which was released two weeks back. The sarod adds an uplifting touch.

The video itself gives us a glimpse of the ups and downs that Jiah and Aditya may share as their professional and personal relationship unfolds with the film's release.

Shraddha has previously sung for Galliyan in Ek Villain, Sab Tera in Baaghi and Do Jahaan in Haider but we can be assured that Tere Mere Dil will soon skyrocket to the top of her repertoire.

Promoted
Listen to the latest songs, only on JioSaavn.com
Directed by Shujaat Saudagar, Excel Entertainment's Rock On 2 hits theatres November 11.