Shilpa Shetty's Son Viaan, 9, Is Making Us Look Bad With His Work Out Video 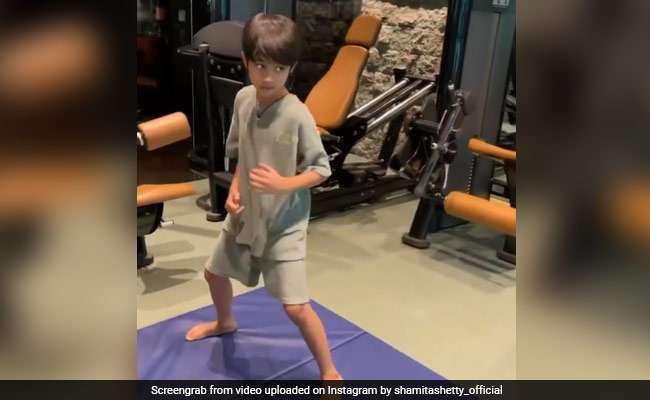 Viaan in a still from Shamita Shetty's video (courtesy shamitashetty_official )

Looks like actress Shilpa Shetty is not the only fitness enthusiast in the Shetty-Kundra household. There's also a pint-sized fitness aficionado in the house - and here, we are talking about Shilpa Shetty and Raj Kundra's son Viaan, who is just nine years old. Shilpa Shetty had previously revealed that Viaan often hits the gym when she's working out and recently, we got a glimpse of nine-year-old Viaan's exercise regime on Instagram. Shilpa's sister Shamita Shetty had recently shared a montage of Viaan's work out routines on Instagram as a Monday Motivation post. Shamita Shetty, who is also at the top of her fitness game, addressed her nephew as "My baby Viaan."

In the video, Viaan can be seen practicing shadow boxing, push-ups, gymnastics, resistance band exercises along with some running time on the treadmill and pulling off some super cool somersaults. No doubt Viaan is a fan of bonafide fitness enthusiast Tiger Shroff. Here, take a look:

Shilpa Shetty and Raj Kundra got married in 2009 - the couple are parents to two kids - they welcomed Viaan in 2012 - he celebrated his 9th birthday earlier this year. The couple welcomed daughter Samisha via surrogacy last year. On Viaan's birthday in May, Shilpa Shetty wrote a lengthy note about witnessing Viaan grow into a beautiful child: "There's so much to say, So much to do, You're growing up too fast, I'm not even done hugging you," read an excerpt from her post. Shilpa Shetty and Raj Kundra also introduced a new member to the family - a pet dog - on Viaan's birthday.

Shilpa Shetty, known for setting major fitness goals, often trends for her work out videos. She also has her own fitness app dedicated to yoga. In terms of work, Shilpa Shetty was seen as one of the judges on the TV reality show Super Dancer Chapter 3. She will soon be seen in Priyadarshan's Hungama 2, releasing on July 23.