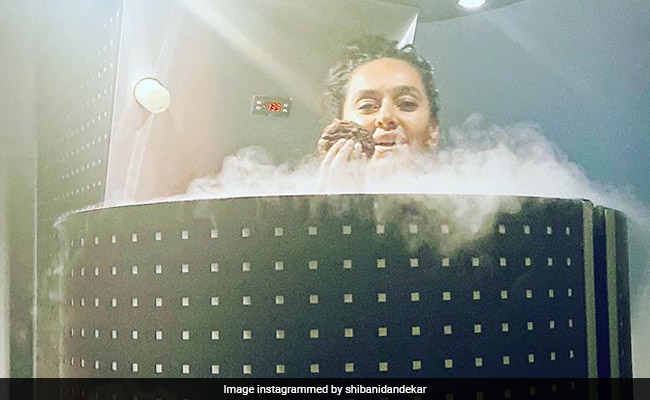 Farhan Akhtar and Shibani Dandekar had a very unusual date - at a cryotherapy session. For the uninitiated, cryotherapy is a treatment procedure which involves direct exposure to extreme cold temperatures, often used to relax strained muscles and tissues among other medical conditions. Shibani Dandekar, who Instagrammed a photo of herself immersed in a cryotherapy container while eating a double chocolate chip cookie, shared her experience in one word: "Balling." In an elaborate Instagram post, she explained: "When you favourite cookie people on the planet Sweetish House Mafia also set up the sickest cryotherapy place The Alchemy Life. You just have to combine the two! Double chocolate chip cookie in -130 degree chamber for 3 mins! Balling! So great for muscle recovery for those that beast mode in the gym."

When you favourite cookie people on the planet @aakashsethi @sweetishhousemafia also set up the sickest Cryotherapy place @thealchemylife you just have to combine the two! double chocolate chip cookie in -130 degree chamber for 3 mins!! Ballin!! So great for muscle recovery for those that beast mode in the gym! #cookiesandcryo #thealchemylife #subzerosquad #wholebodycryo #cryomumbai #cryofacial

Meanwhile on his Instagram story, Farhan Akhtar posted a similar photo of himself (minus the cookie) and wrote: "The cold never bothered me anyway." Farhan also assigned photo and caption credit to his "amazing daughter" Akira. 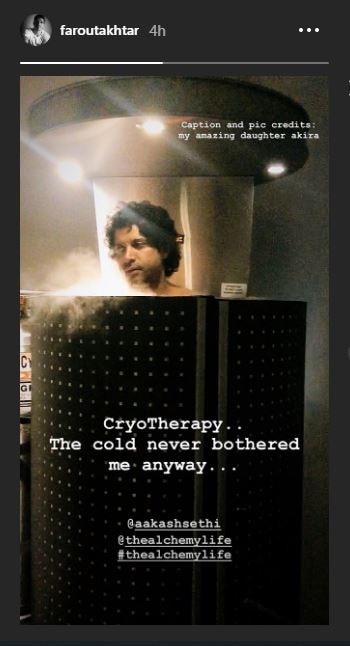 Meanwhile, here are just glimpses of the "beast mode" that Shibani talked about in her post, which explains why both she and Farhan need some cryotherapy in their lives:

Farhan Akhtar and Shibani Dandekar not only go to cryotherapy together but are often spotted together in and around Mumbai. On Diwali, we spotted this adorable photo of the two on Farhan's Instagram:

On the work front, Farhan was last seen in Priyanka Chopra's The Sky Is Pink. Next up, he has the film Toofan in his line-up.