Rishi Kapoor, who has been in the US for over eight months because of cancer treatment, was also recently visited by the Bachchans 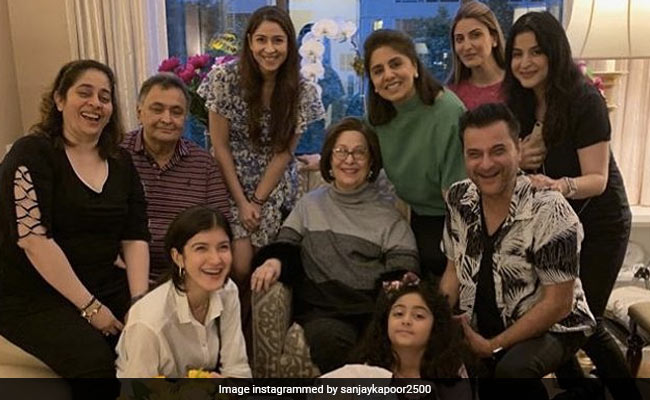 Just days after Rishi Kapoor and Neetu Kapoor hung out with the Bachchans in New York, their visitor's book was also signed by Sanjay Kapoor and his daughter Shanaya, who just stepped into Bollywood as an assistant director for sister Janhvi Kapoor's film. For the get-together in New York, Rishi and Neetu were joined by their daughter Riddhima Kapoor Sahni and her daughter Samara. Sanjay Kapoor Instagrammed his favourite memory from the meeting and wrote: "Happy faces" and "happy faces" indeed as Rishi Kapoor, Neetu Kapoor, Sanjay Kapoor, Shanaya and Bhavana Panday (minus Ananya or Chunky Panday) can be seen smiling ear-to-ear. Little Samara, whose superpower is being adorable, struck a cute pose for the camera.

Meanwhile, Shanaya has been having the time of her life on her US vacation. Here are some of the best memories from the trip, as shared by Maheep and Sanjay Kapoor and Bhavana, whose daughter Ananya is best friends with Shanaya.

Los Angeles is a vibe

Rishi Kapoor, who has been in the US for over eight months because of cancer treatment, was also recently visited by the Bachchan trio - Abhishek, Aishwarya and Aaradhya - in New York and fans were treated to such delightful pictures on Instagram. Also joining the meet-and-greet were Rishi Kapoor's son Ranbir Kapoor and actress Alia Bhatt, who Ranbir is reportedly dating.

When in the US, Rishi Kapoor had a star-studded guest list, which included Shah Rukh Khan, Aamir Khan, Deepika Padukone, Priyanka Chopra, the Ambanis, Vicky Kaushal and Anupam Kher to name a few.

Bollywood celebrities have always dropped by Rishi Kapoor's place whenever in Big Apple. The veteran actor, who is expected to return home soon, has had visitors such as Deepika Padukone, Priyanka Chopra, Shah Rukh Khan, Aamir Khan, Vicky Kaushal and the Ambanis.

Rishi Kapoor, who went to the US in September last year, was last seen in Netflix movie Rajma Chawal.