Shamita Shetty and Nishant Bhat groove to Mercy by Badshah 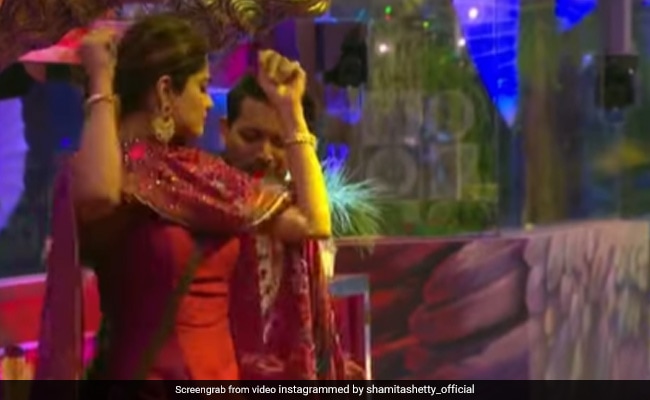 Hey Shamita Shetty, show some mercy, please. Our eyes can't take it anymore. Reason? We all know that Shamita is inside the Bigg Boss house, right? And, this time, she has shared a clip featuring herself and housemate Nishant Bhat. Before you overthink, the video isn't about an argument or a fight. The two are killing us with their dance moves. Can't believe it? You are not alone. But, yes, the chemistry is commendable. And, we will give full marks for the song selection. The two picked Mercy by Badshah for the act. The caption read, “Oolala Shamita Shetty, please have mercy have on us.” “ Team SS [Shamita Shetty]” has also asked fans, “Kaisa laga aap sabko Nishu aur Shamzie ka ye sizzling performance? [Did you like Shamita and Nishant's sizzling performance?].”

Fans simply loved it. The comment section is filled with fire and red heart emojis. A person wrote, “Bahut achay [Very nice].” Another said, “I literally couldn't take my eyes off Shamita.”

Well, this isn't the only time Shamita Shetty has given a jaw-dropping performance inside the Bigg Boss house. Earlier this week, Shamita grooved to the epic disco number Koi Yahan Aha Nache Nache by Usha Utthup. And, oh boy. She nailed it. In the clip, Shamita is joined by Rajiv Adatia. For the video, the caption went like this, “Kaisa laga Shilpa Shetty ke pyaaare tunki runki ka ye performance aap sabko? [What do you have to say about this performance?]” FYI: Shilpa Shetty fondly calls her sister, Shamita, Tunki.

Meanwhile, Shilpa Shetty has left no stone unturned while rooting for her sister. Talking about how proud is she of Shamita, the actress wrote, “Seeing you take on every hurdle, challenge, and disagreement head on is something that makes me extremely proud of you, Tunki. I love how gracefully and tactfully you have dealt with everything in this journey. And now, I know it's time for you to come home… with the trophy. “Shamita's Tribe” has got your back, my darling. Stay strong. You have got this.”

Shamita Shetty was also part of Bigg Boss OTT. She had entered the Bigg Boss 15 house along with Nishant Bhat and Prateek Sehajpal.