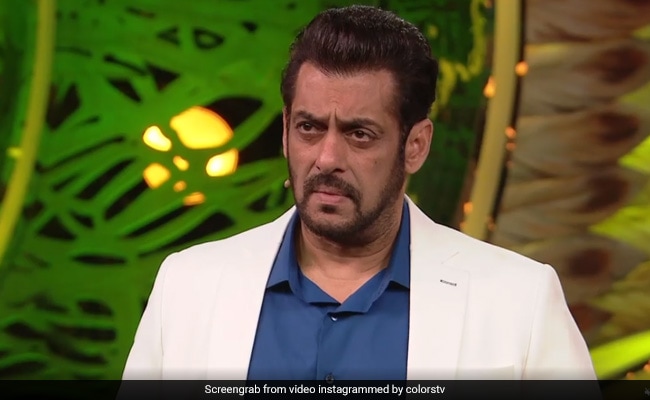 Bigg Boss 15: Salman Khan in a still from the show. (courtesy: colorstv)

Salman Khan had a no-nonsense approach to the contestants on Bigg Boss 15 during Saturday's episode of Weekend Ka Vaar. And on the receiving end of his anger and comments was actress Shamita Shetty who was seen getting into a series of fights with housemates during the week. In particular, Shamita Shetty was at loggerheads with contestants Abhijit Bichukale and Devoleena Bhattacharjee. And, these fights also extended to Weekend Ka Vaar, much to Salman Khan's anger. It all started when actress Raveena Tandon appeared for a task and asked contestants to name a gunehgaar (culprit) inside the Big Boss house.

And soon enough, Abhijit Bichukale was named by Rashami Desai. Speaking about Abhijit, Rashami said, “Inhone do baar Shamita Shetty ko pair ki jooti bataya hai aur ye baat mujhe chubhi hai (He has compared Shamita Shetty to his footwear twice and this has affected me)."  To this, Shamita Shetty said, “He called me pair ki jooti (footwear)”? Adding “Kaun hai ye aadmi (Who is this man)?"  She also said that Abhijit compared her to a dog.

While Salman Khan confirmed that he did not call her any such thing, Shamita reiterated, “But he has called me pair ki jooti." An enraged Shamita Shetty continued, “Why is he here?” This did not go down well with Salman Khan, who said, “Will you become one if he is calling you names? You just said ‘why is he here?' That is not correct Shamita. Laanat hai (shame on you).”

Things got heated in the Bigg Boss 15 house with the entry of wildcard contestants such as Rashami Desai, Rakhi Sawant and her husband, Ritesh in addition to Devoleena Bhattacharjee and Abhijit Bichukale. Now it is all eyes on who will bid adieu to the show this week.