Shilpa Shetty has rooted for Shamita Shetty earlier too. 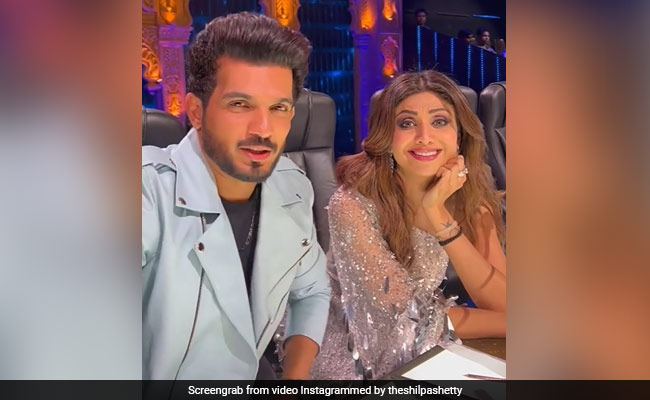 Shilpa Shetty barely misses a chance to give a shout-out to her sister Shamita Shetty. Shamita, who is a contestant in Bigg Boss 15, has got all the support from her fans, friends and family. Rooting for her are Shilpa and actor Arjun Bijlani. In a video that was uploaded on Instagram, we see the two of them praising Shamita's performance in the TV reality show. Arjun said, "Yes, we are supporting our favourite, Shamita Shetty, who is my very dear friend. Aur mujhe lag raha hai ki woh bohot achha khel rahi hai Bigg Boss mein [I think she is playing very well in Bigg Boss]."

Arjun Bijlani went on to add, "She is definitely one of the finalists. Matlab, OTT se ab tak uska jo safar raha hai, it's been incredible [Her journey from Bigg Boss OTT till here has been incredible]."

Slamming all the previous allegations on the game show where Shamita Shetty was called "fake", Arjun Bijlani said, "Woh bilkul fake nahi hai [She is not at all fake]. I think she is one of the most genuine players. Jo uske dil mein hai woh mu par hai [She says what's in her heart]. She is one of the people I know who is a great human being." Shilpa Shetty also seconded his views in the video.

Towards the end, Arjun Bijlani said, "Shamita Shetty, hats off to you. Shilpa Shetty joined him and shouted, "Go, Shamita. Go, my Tunki."

Arjun Bijlani ended the video with a powerful message for Shamita Shetty, "You are in it to win it."

Here's what Shilpa Shetty wrote in the caption, "Can't say this enough but all of us are really proud of your journey in the Bigg Boss house, my Tunki. Arjun Bijlani agrees. You have continued to be genuine and real, while you remained headstrong and sensitive. Such a powerful combination that is. We're rooting for you all the way to the finish line, my darling. Love you."

Earlier, when Shamita Shetty locked horns with her co-contestants on Bigg Boss 15, Shilpa Shetty stood by her side. She wrote a note and introduced Shamita as "my brave soul, a fighter, my sister." Here's the post:

Shilpa Shetty's constant support for Shamita Shetty is incredible. What do you say?