Shama Sikander Is Trending For Her New Beach Picture 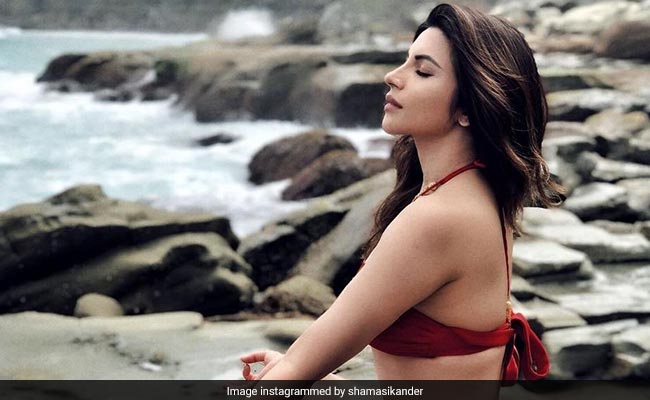 New Delhi: Shama Sikander is one of those stars, who never fails to elate her fans with her social media posts and the Internet loves her back. Shama Sikander is trending, yet again, because of her stunning picture from Melbourne. Shama, who is best known for featuring in TV serial Yeh Meri Life Hai, posted a new photo of herself in a red bikini, in which she can be seen doing a yoga asana on the beach and we must say that Shama's photo is definitely calendar-worthy. "World peace can be achieved, when in each person the power of love replaces the love of power. #AbDilKiSunn," Shama captioned her photo. Shama's photo has done several rounds on social media and users have filled up the comment section with compliments such as "perfect" and "awesome" for the actress.

World peace can be achieved, when in each person the power of love replaces the love of power. #AbDilKiSunn

Recently, Shama responded to repeated slut-shaming with an Instagram post declaring, "Yes I have b**bs... they're mine and I love them." The photo she posted is of her in a bikini. Trolls who 'like to give body parts names' should 'get over it and move on in life,' the 38-year-old actress wrote, after pictures she posted from a trip to Australia were received with offensive and vile comments.

A woman has BOOBS...that's what makes her different than men and I'm grateful that I'm a woman and a blessed one indeed. Yes "I HAVE BOOBS" and nice ones indeed.. they are "juicy" and also are "melons " or whatever else you prefer calling them. I think it's time for all those TROLLS who like to give my body parts names like these to get over it and move on in life. They're mine and I love them... #BodyShaming #NotTolerated #RespectWomen #LoveForBikini

Earlier, Shama made headlines when she confessed to have been diagnosed with bipolar disorder five years ago. She opened up about the extent of her struggle with the psychological disorder. The actress explained she was "bored" with herself and with her life, reported Times Of India.