Shahid Kapoor Was Asked To Describe Kabir Singh Co-Star Kiara Advani In A Word. He Used 3 Kiara Advani photographed with Shahid Kapoor at a party.

Bollywood stars, just like everyone else, are trying to keep themselves occupied in the quarantine phase. While some are busy playing "Twitter Antakshari" (read Smriti Irani and Karan Johar), others are trying to keep themselves occupied with cleaning drills - like Deepika Padukone. Shahid Kapoor resorted to a rather millennial way to entertain himself. As a part of Instagram's "Ask Me" feature, Shahid interacted with his fans and answered their questions. An Instagram user asked the "Padmaavat" actor, "One word for Kiara?" Shahid gave a hilarious answer. He made a reference to his 2019 film Kabir Singh and quoted a dialogue that went viral. "Kisne touch kiya," wrote Shahid Kapoor. 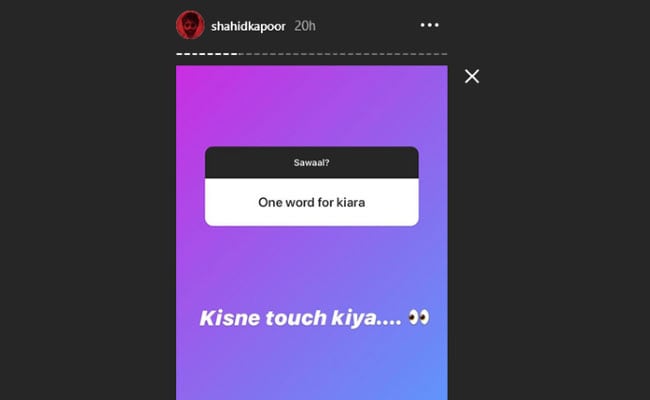 Kabir Singh, starring Shahid Kapoor and Kiara Advani, opened to tremendous box office numbers despite being savaged by critics for its toxic and misogynistic view of romance. The film , which is a remake of the Telugu hit Arjun Reddy, showcases the story of a Dr Kabir Singh - a drug addict, an alcoholic and an obsessive lover, who happens to be stubborn and self-destructive and his love for Preeti knows no boundaries.

On the work front, Shahid Kapoor will next be seen in Jersey, a Hindi remake of the Telugu film of the same name. Gowtham Tinnanuri, who directed the original movie, is also helming the Hindi version. Shahid Kapoor plays the role of a former cricketer. Jersey is scheduled to hit screens in August.

Kiara Advani, who was last seen in Netflix's Guilty, has several projects in her kitty, which include Laxmmi Bomb with Akshay Kumar, Bhool Bhulaiyaa 2, opposite Kartik Aaryan and Indoo Ki Jawani.