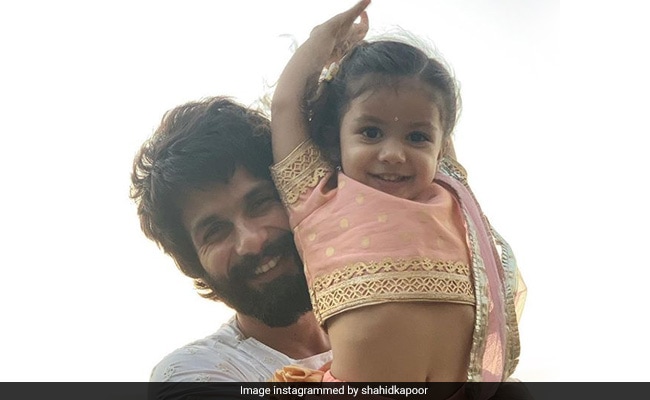 Actor Shahid Kapoor, in an interview with Filmfare, revealed that being a father is "nice" but also "frustrating" sometimes. The 36-year-old actor married Mira Rajput in July 2015 and they are parents to daughter Misha and baby son Zain. Talking about how his life has changed post fatherhood, Shahid Kapoor said he is struggling for "breathing space" and added: "I was pretty self-oriented till I became a parent. Though I believed I was selfless. But when I became a parent, I realised I was actually damn selfish. Now, I don't put myself first. You end up thinking about your kids and family first. Sometimes it's nice. Sometimes it's frustrating because you do need to put yourself first at times. Every individual needs to have their own breathing space. I struggle with it."

Cause she knows she can do it all better.

The Kabir Singh actor also appreciated how much his parents Pankaj Kapur and Neelima Azeem have done for him till now and apologised for being a "prick" before. "I respect my parents a lot more today than I did before I was a parent. Now I understand what all they did for me. I don't know if it's too late for me to apologise but through Filmfare I say, 'Mom and dad, sorry for all those times I was a prick'," Shahid told Filmfare.

Shahid Kapoor met Mira Rajput in 2014 while he was filming Udta Punjab. The couple welcomed Misha in the year 2016 and Zain in 2018.

Earlier, in an interview with news agency PTI, Shahid Kapoor said he has "matured" post fatherhood. "Fatherhood has brought a lot of change in me as a person and as a human being. My priorities have changed. I am less self-oriented now because I believe actors can never be not self-oriented. I think I am more open to different point of views. I have matured and feel a lot more grown up now," he told PTI.

On the work front, Shahid Kapoor was last seen in Kabir Singh, which is a Hindi remake of the 2017 Telugu film Arjun Reddy.