Saira Banu, wife of actor Dilip Kumar, says Aamir Khan is just 'one call away' while Shah Rukh, their 'mooh-bola beta,' was 'difficult to reach over' 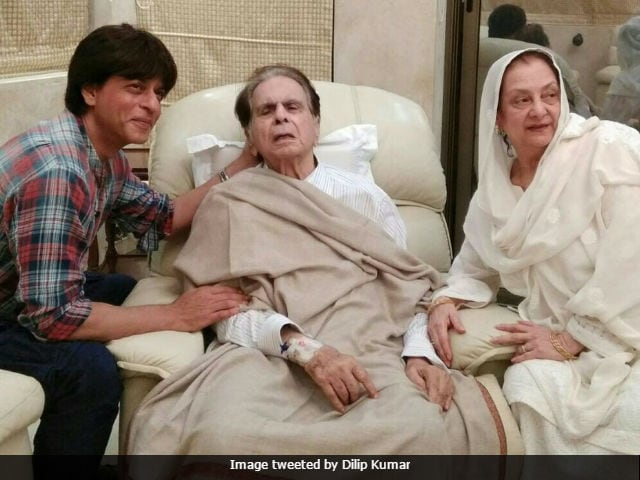 New Delhi: Shah Rukh Khan on Tuesday visited actor Dilip Kumar, who was recently hospitalised due to a kidney related problem. Just days after Dilip Kumar settled in his home, Shah Rukh Khan dropped by with his daughter Suhana to visit the actor, whom SRK had once called the 'pillar of the film industry.' Saira Banu told Mumbai Mirror that Shah Rukh, who was busy with the promotions of his new film Jab Harry Met Sejal has promised to 'to be more connected' and SRK's contemporaries - Aamir Khan and Salman Khan - are 'more accessible.' She said: "Shah Rukh was the one who was difficult to reach over the last two-three years. When I pointed this out to him, he admitted that he has been out of the country on shoots a lot but promised to be more connected now," reports Mumbai Mirror. Saira Banu also said that Aamir Khan "goes out of his way" to comply with their requests and "is constantly in touch" while for Salman, she said: "They (Salman and his father Salim Khan) often drop by, on festivals and occasions like saab's birthday," reports Mumbai Mirror.

"Saab's taught me that it's important to be accessible to senior actors when they are old and ailing," she added. Dilip Kumar, 94, spent a few days in the hospital and returned home after making a satisfactory recover, his wife Saira Banu had said in her statement.

Saira Banu shared pictures of SRK's visit to their home on Tuesday and later told Mumbai Mirror: "I even saw him chanting a dua under his breath and blowing it on saab's face. He was there for saab's 89th birthday too and sat close to us, holding his hand and mine." On Twitter, Saira Banu said Shah Rukh was their "mooh-bola beta." She told Mumbai Mirror: "I have always said that if we had a son, he might have looked like Shah Rukh. Both he and saab are a lot alike and have similar hair, which is why I like to run my fingers through Shah Rukh's when we meet. This time he asked me, 'Aaj aap mere baalon ko haath nahin laga rahi hain?' I was happy to."

With eight awards each, Shah Rukh Khan and Dilip Kumar share the record for the most wins in Filmfare Best Actor category - including for their common film Devdas. Dilip Kumar featured in the Bimal Roy-directed version while Shah Rukh Khan was directed by Sanjay Leela Bhansali in the adaptation of Sarat Chandra Chattopadhyay's novel of the same name.