Shah Rukh Khan said: "Charity should be done in silence and with dignity." He received his honorary doctorate from University Of Law, London 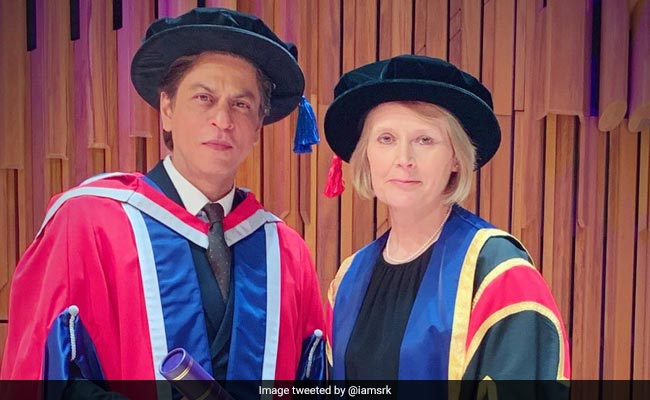 Shah Rukh Khan received yet another honorary doctorate - this time from the University Of Law, London for Philanthropy - and shared the news on his social media accounts. Sharing a photo from the felicitation ceremony, the 53-year-old superstar wrote: "Thank you for the honour, University Of Law, and my best wishes to the graduating students. It will encourage our team at Meer Foundation to strive 'selfishly' to share more." Shah Rukh Khan's Meer Foundation is a non-profit organisation that works towards women empowerment through various projects and NGO collaborations. Meer Foundation also works to help acid attack survivors. Shah Rukh Khan received the doctorate at the university's graduation ceremony of more than 350 students.

Thank u for the honour @universityoflaw & my best wishes to the graduating students. It will encourage our team at @MeerFoundation to strive 'selfishly' to share more. pic.twitter.com/IBI1I6UlFY

In a statement, Shah Rukh Khan added: "I believe that charity should be done in silence and with dignity. One cannot speak about their charitable acts because it loses its purpose. I have been privileged to be able to use my status as a public personality to champion causes close to my heart," reported news agency IANS. In the past, Shah Rukh Khan has worked for polio awareness campaigns and also with the National Aids Control Organization. He is also associated with Make-A-Wish Foundation, an NGO dedicated for the betterment of children. SRK's charity work also includes working in aid of cancer patients.

In his statement, Shah Rukh also said. "I actively participate with the causes of women empowerment, rehabilitation of the underprivileged and basic human rights. I firmly believe that I have to give back to the world that has given me so much. I am humbled with this honorary doctorate bestowed upon me and would like to thank everyone involved for choosing me."

Shah Rukh Khan also has honorary doctorates from Maulana Azad National Urdu University, University of Edinburgh and University of Bedfordshire. On the work front, he was last seen in Zero and has a biopic on astronaut Rakesh Sharma in the line-up.