They were accompanied by Uday Chopra and close friend Kaajal Anand 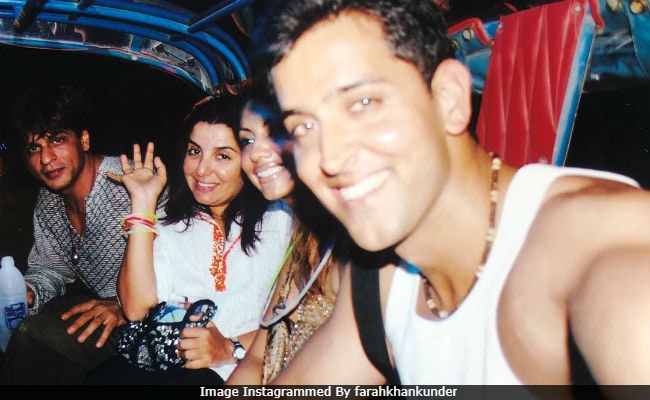 Choreographer-filmmaker Farah Khan perhaps didn't want to wait till Thursday to post this throwback picture, featuring herself with Shah Rukh Khan, Gauri Khan and Hrithik Roshan. This afternoon, Farah lit up Instagram with the 'Tuesday Throwback' picture with these stars, taken in 2003 in Koh Samui, Thailand. They were travelling in a tuk-tuk on New Year's Eve, as revealed by Farah, and were also accompanied by Uday Chopra and close friend Kaajal Anand. "Tuesday Throwback, New Year's Eve. Only in Koh Samui could Shah Rukh Khan, Hrithik Roshan and Gauri Khan travel in a tuk-tuk. Kaajal and Uday, sorry, you'll we're sitting on the opposite side," Farah captioned the post, adding hashtags like 'memories' and 'a night to remember.'

Take a look at the throwback photo here.

As a choreographer, Farah Khan has frequently collaborated with Shah Rukh and Hrithik for several films, including their 2001 blockbusterKabhi Khushi Kabhie Gham. In 2004, she debuted as a director with Main Hoon Na, which starred Shah Rukh Khan in the lead role. Om Shanti Om and Happy New Year, her other two films as a director, were also headlined by SRK while for Tees Maar Khan, she signed Akshay Kumar in the lead role.

On the work front, SRK, last seen in Zero, has a biopic on astronaut Rakesh Sharma, titled Saare Jahan se Achha, in the pipeline. Meanwhile, Hrithik Roshan's next film is Super 30, a biopic on mathematician Anand Kumar. He has also signed up for an untitled film with Tiger Shroff and Vaani Kapoor, directed by Siddharth Anand.