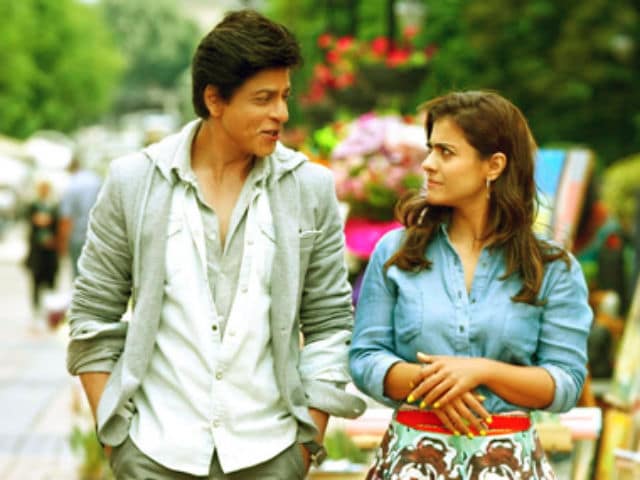 SRK and Kajol in a poster from Dilwale

New Delhi: The 'half look' poster from Dilwale is out and features actors Shah Rukh Khan, Kajol, Varun Dhawan and Kriti Sanon facepalming each other, with the aim of 'outsmarting' their film's director Rohit Shetty.(Also Read: Shah Rukh, Salman Dance For Each Other in Khan Double Whammy Dubsmash)

Our Director Rohit not allowing us to reveal our first look. So v hav outsmarted him by releasing only Half a Look. pic.twitter.com/ylH5VIO86z

After calling it a wrap, SRK, who claimed he had 'nothing better to do,' invited the team to send them what he called their half looks.

Everybody who is free like I am after wrap...& hav nothing better to do, send me your half looks...

And we do it all over again as we wrap our film....love you Dilwales. pic.twitter.com/jAjZZnjnsq

SRK 'was strict' with the film's director Rohit Shetty too:

And the man himself....we are strict with him too. Only half face Rohit the Shetty pic.twitter.com/eeMaUeKvI2

But a bit lax with co-star Varun Sharma:

These two can cover their faces as much as they want...me giving you full face... pic.twitter.com/2PWhU8OWr8

SRK, who seems to be on a tweeting spree, had also shared a video of Team Dilwale's Dubsmash of the title track of Prem Ratan Dhan Payo and one of his son AbRam pouting with filmmaker Karan Johar.