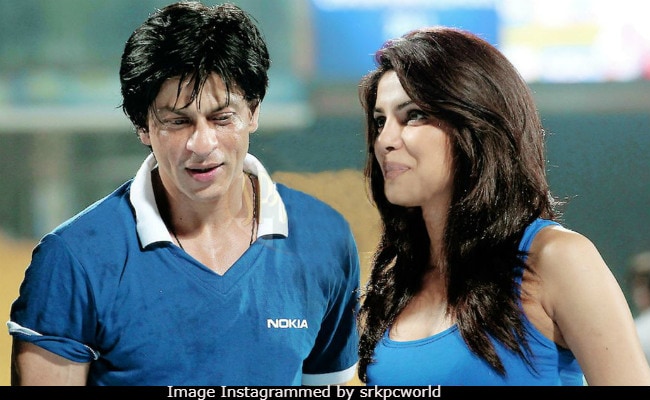 Is Priyanka Chopra really getting married to Nick Jonas? We can't really tell and it appears, neither can Priyanka's co-star Shah Rukh Khan. The 52-year-old superstar was recently asked about Priyanka's speculated wedding when he responded with a joke of sorts, reported news agency ANI. "Even I am getting married. I'll send you an invite. I will send you the card for the reception and also, do come for the mehendi." LOL, that was typical Shah Rukh Khan. Priyanka and Shah Rukh have co-starred in the two Don movies directed by Farhan Akhtar. As per rumours, Priyanka is already engaged to 25-year-old American singer Nick Jonas and is looking forward to a September wedding.

After rumours about Priyanka's speculated wedding erupted online, an update of sorts from the Chopra corner was provided by Kangana Ranaut, who speaking to an event in PTI said she recently congratulated Priyanka, adding: "I spoke to Priyanka the other day and I congratulated her. She responded in a very. She seems excited and very happy. If such an event is taking place, I'd love to celebrate with her because she is lovely and she deserves all the happiness. She is a very dear friend. I get very happy and excited with weddings and engagements." However, when asked if Priyanka confirmed a wedding date or not, she said: "Not to me."

The Nick-Priyanka wedding rumours escalated after Bharat director Ali Abbas Zafar announced that the 36-year-old has left the project and informed the team "in the Nick of time" (See the capital N there?), sending out "loads of love and happiness for life." Soon after international tabloids like People Magazine and E! reported that the rumoured couple may have been engaged for over a week - Nick reportedly popped the question during her birthday celebrations in London. This was followed by the fresh set of speculation about a date, which is reportedly to be sometime in September.

Meanwhile, Priyanka Chopra has one Bollywood movie in the reserve - she will begin shooting Shonali Bose's The Sky Is Pink.