Suhana also invited her friend Shanaya, who attended with her father Sanjay Kapoor 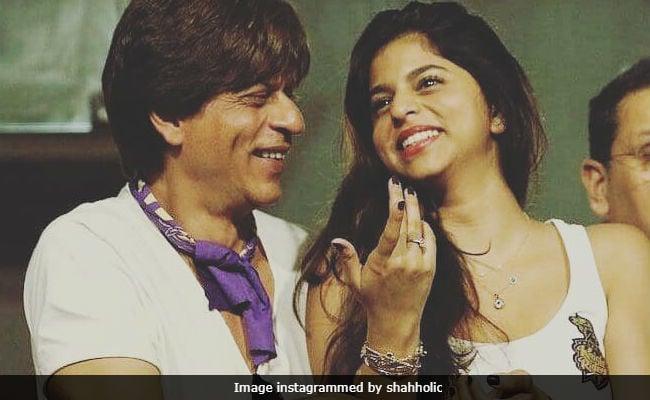 New Delhi: Shah Rukh Khan's Indian Premier League (IPL) team Kolkata Knight Riders' played the first match of the season on Sunday and won but the Internet had eyes only on SRK's daughter Suhana, who attended with her friend Shanaya. Suhana smiled and laughed as Kolkata Knight Riders played a fantastic match against Royal Challengers Bangalore (captained by Virat Kohli) and won by four wickets. Shah Rukh's son AbRam, who regularly attends KKR matches, was engrossed on a mobile phone throughout the match. Suhana,17, dressed in denims and a tank top (which had KKR logo embossed on it) couldn't take her eyes off the field. Suhana had invited Shanaya, who attended with her father Sanjay Kapoor. We also spotted Shah Rukh's friend Kajal Anand in some photos, which are now being circulated on social media by fan clubs.

Here are pictures of Suhana and Shanaya with Shah Rukh and the others at Eden Gardens, where the match was played.

Suhana and Shanaya's trio of friends is completed by Ananya Panday (daughter of Chunky and Bhavana Panday), who is reportedly filming Student Of The Year 2 in Dehradun. Ananya was spotted at the airport a few days ago with Student Of The Year 2 director Punit Malhotra. Filmmaker Karan Johar, who is financing the project, shared a picture of the first day on the film's sets and promised to introduce the complete cast on April 11.

Promoted
Listen to the latest songs, only on JioSaavn.com
Suhana Khan is currently completing her education but we know she'll also enter Bollywood as Shah Rukh Khan had said Suhana nurtures a desire to be an actor.

Till then, we'll meet Suhana at KKR matches.