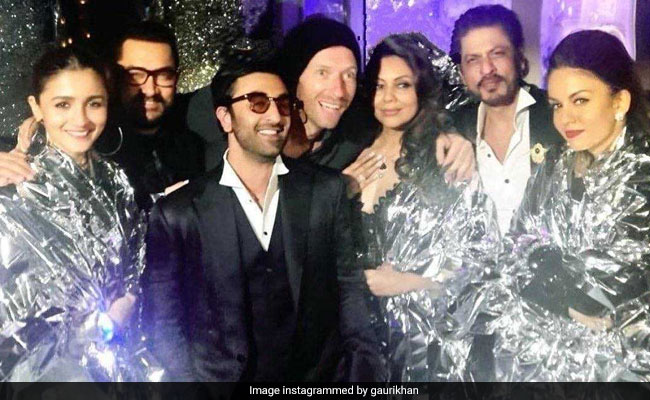 Gauri Khan treated her Instafam to an epic picture on Friday evening and it had us hooked immediately. Why, you ask? Well, let's just say that the picture features too many stars in a single frame. Gauri added a picture of herself and SRK along with Coldplay's lead vocalist Chris Martin to her Instagram profile. BTW, did we tell you that besides SRK and Gauri, the photograph also features Bollywood stars Aamir Khan, Alia Bhatt, Ranbir Kapoor and Natasha Poonawalla. The picture appears to be from Switzerland, where all the stars had converged for the pre-wedding celebrations of Akash Ambani and Shloka Mehta. In her post, Gauri tagged all the stars and added the caption: "A huddle with Chris Martin." She accompanied the post with a heart emoji. Needless to say, the picture received lots of love from fans and it is going insanely viral on social media.

Last week, Shah Rukh Khan and Chris Martin had an interesting Twitter exchange, wherein the Coldplay artist shared a list of some of his favourite songs on the official Twitter account of Colplay and he signed off his note, saying: "Shah Rukh Khan forever." What followed suit was a sweet reply from Shah Rukh, who wrote: "Will surely listen to the music you are listening to my man. Will send you some Indian music too. Love to you and health and life forever and more to you."

Will surely listen to the the music u are listening to my man. Will send u some Indian music too. Love to you & health and life Forever and more to you https://t.co/iAmPIb6sa7

Shah Rukh and Gauri Khan had hosted Chris Martin along with his Coldplay colleagues at their Mumbai residence in 2016.