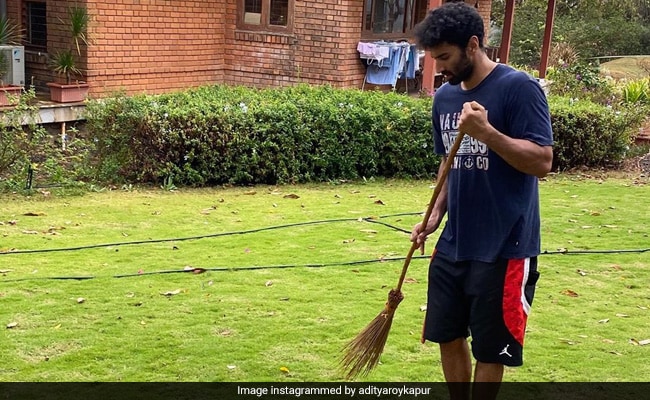 Leave it to Arjun Kapoor to troll his friends on social media. This time his target was Aditya Roy Kapur. On Thursday, Aditya posted a picture on his Instagram profile, in which he could be seen standing with a broom in his hand. The actor captioned the post: "Plan B." Now, Arjun Kapoor being Arjun Kapoor, chanced upon the opportunity and trolled the Malang actor. He wrote: "He emerges." Malang director Mohit Suri also left a comment on his post. He wrote: "Authentic."

Aditya Roy Kapur seems to have taken a leaf from his Fitoor co-star Katrina Kaif's post. Katrina, on Thursday, shared a video on her Instagram profile, in which she could be seen cleaning the floor with a broom. Katrina said in the video: "We're all doing our part." Her sister Isabelle added, "Uh, those brooms also shed a little bit." Sharing the video on her Instagram profile, Katrina wrote: "Day 21. One day at a time guys.......We all gotta do our part. Apparently Isabelle Kaif's part is to give commentary and pro tips while seated. Gotta mix it up. This is seriously good exercise BTW. She accompanied the posts with the hashtags #stayhome and #helpoutathome.

Aditya Roy Kapur made his Bollywood debut with the 2009 film London Dreams. He has also featured in films such as Action Replayy, Guzaarish, Ok Jaanu. Aashiqui 2, Yeh Jawaani Hai Deewani and Fitoor among others. On the work front, the actor was last seen in the thriller Malang, also starring Anil Kapoor and Disha Patani.