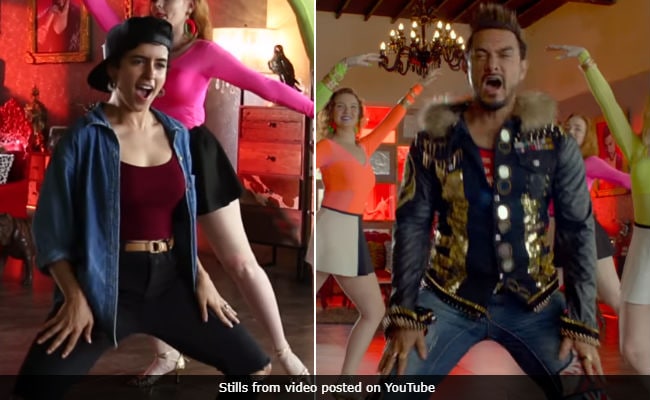 New Delhi: If you enjoyed watching Aamir Khan dance to Sexy Baliye from upcoming film Secret Superstar, then imagine how much Sanya Malhotra would have enjoyed to choreograph the "cheap party moves" (as Aamir said) for the 52-year-old actor. Well, Sanya Malhotra, choreographer of Sexy Baliye, said in the making of the song video: "Mujhe Aamir ko nachane me bahut maza aaya." For Sanya, who debuted in Aamir Khan's blockbuster Dangal last year, Sexy Baliye was the song she choreographed. And it was awesome. In the behind-the-scenes video, we also get a glimpse of Sanya Malhotra on the dance floor teaching Aamir the steps. It is H.I.L.A.R.I.O.U.S.

Watch the making of Sexy Baliye:

Earlier, when Aamir Khan was complimented for his dance moves, he had said: "These cheap party moves are of Sanya Malhotra." Apparently, Sanya enthralled the cast and crew of Dangal with her dance skill in between the shoot. Something which Aamir Khan remembered while they were looking for a choreographer, who'd make 'creepy' (Kiran Rao told News agency PTI) Shakti Kumaarr look even more detestable. While describing Shakti Kumaarr, Kiran told PTI that he's "kind of a guy you don't want to hang out alone in the room with."

Secret Superstar features Zaira Wasim in lead role. Zaira, like Sanya, debuted in Dangal. Zaira played the role of young Geeta Phogat in the film and also won a National Award for her performance.

Promoted
Listen to the latest songs, only on JioSaavn.com
Secret Superstar is directed by Advait Chandan and it will hit the screens on October 19, a day before Rohit Shetty's Golmaal Again.