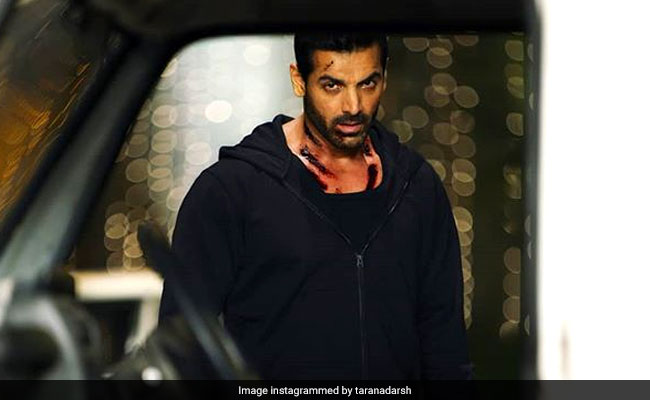 John Abraham in a still from Satyameva Jayayte (Courtesy taranadarsh

John Abraham's Satyameva Jayate continues to do "well" at the box office and has managed to collect Rs 62.50 crore in eight days, Box Office India report stated. On Day 8, Milan Zaveri-directed film has collected Rs 5 crore. The film also witnessed a "boost" at the box office because of Eid holiday on Wednesday (Day 8). "The total of the film stands at 62.50 crore nett which is a very good number for this film. There will be a drop in collections tomorrow and probably in week two also but even then it is sure to emerge a hit," the report added.

Satyameva Jayayte released on Independence Day and within a week, the film had collected Rs 57.50 crore. It was also predicted that the film would witness an upward trend on Wednesday (because of Eid holiday) and much like the predictions, Satyameva Jayayte collections did go up. The film had an applaudable start at the box office as it collected Rs 20.52 crore on its opening day.

In his review for NDTV, film critic Saibal Chatterjee gave the film 1 star out of 5. "This is John Abraham's comfort zone. Going on the rampage is all in a day's work, be it springing to the aid of a young man wrongly confined in a police station and tortured or a girl assaulted by a policemen. Veer might be a ruthless killer for a cause but he is a good guy with a good enough reason for his marauding ways," he wrote.

Satyameva Jayate clashed at the box office with Akshay Kumar's Gold. The Reema Kagti-directed film has earned Rs 85.85 Crore so far. Sonakshi Sinha's Happy Phirr Bhag Jayegi will hit the screens this Friday. It will be interesting to see if Satyameva Jayate and Gold continue their remarkable feat.