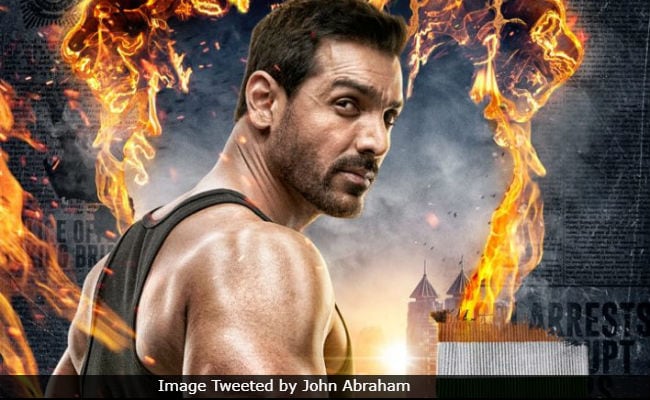 New Delhi: The first poster of John Abraham's Satyameva Jayate just dropped on the Internet on Wednesday and intense can't even begin to describe it. John Abraham shared the poster on Twitter and captioned it: "This Independence Day, Justice will roar!" The poster features John Abraham in the center, who can be seen surrounded by fire taking the outline of India's nation emblem. A subtitle - "Beimaan Pitega, Corruption Mitega" - has been placed at the bottom of the poster. Going by the first look, Satyamev Jayate (which means 'truth always triumphs') might revolve around the theme of patriotism and deal with subjects like corruption. Satyamev Jayate is an action thriller that also features Manoj Bajpayee and Amruta Khanvilkar in pivotal roles. The film went on floors in March and it is directed by Milap Zaveri.

The film's release date as per the poster is August 15, the same as Akshay Kumar's Gold. Speaking to news agency IANS, John Abraham said that he had no say in deciding the release date of the film. "Akshay is an actor in Gold and I am an actor in Satyamev Jayate. It's a producer's decision from both sides. It is about Excel Entertainment and T-Series, so I have no say in that at all. As far as competing with Akshay is concerned, I want to make it clear that he is my senior in the industry," said John.

Promoted
Listen to the latest songs, only on JioSaavn.com
John Abraham's latest film Parmanu: The Story Of Pokhranis back in the headlines for its good performance at the box office and has earned Rs 61.29 crore within four weeks.