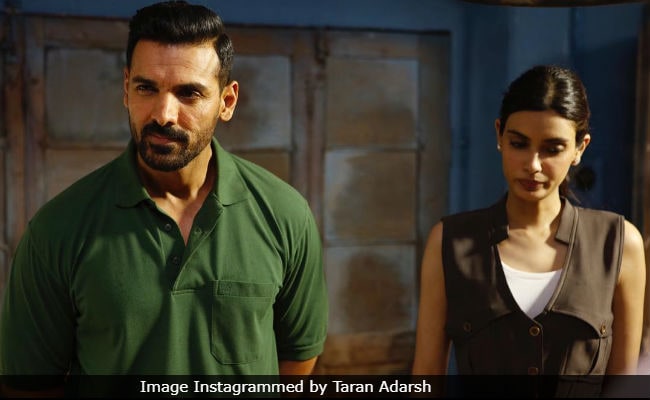 John Abraham and Diana Penty in a still from Parmanu. (Image courtesy:

New Delhi: It wouldn't be wrong to say that John Abraham's Parmanu: The Story Of Pokhran turned out to be quite a safe bet for the filmmakers of the film as it has managed to collect overs Rs 61.29 crore within four weeks of its release, reports trade analyst Taran Adarsh. Parmanu's performance at the box office remained intact despite facing stiff competition from Salman Khan's Race 3, which has churned over Rs 120 crore within four days of its release. Parmanu's performance took a dip on Friday (due to the release of Race 3). However, on Monday Parmanu's collection gained momentum, earning Rs 38 lakh while Race 3 witnessed a decline in its business, reports Taran Adarsh.

Parmanu and Race 3 deal with extremely different subjects but they have been equally adept at performing well at the box office. Parmanu is based on the 1998 nuclear test explosions that took place in Pokhran while Race is a high-octane action thriller with strong ensemble cast.

According to Taran Adarsh, Parmanu's consistent performance could be attributed to the film's strong content while Race 3's golden run at the ticket window could be a result of Eid festivities. "Content scores and box office numbers do the talking... Eid festivities gave massive boost to its business," he tweeted.