"Thank you so much Akshay sir for bringing so much love, laughter, energy and positivity on our set and sorry for stalking you for photos in all our costumes," wrote Sara 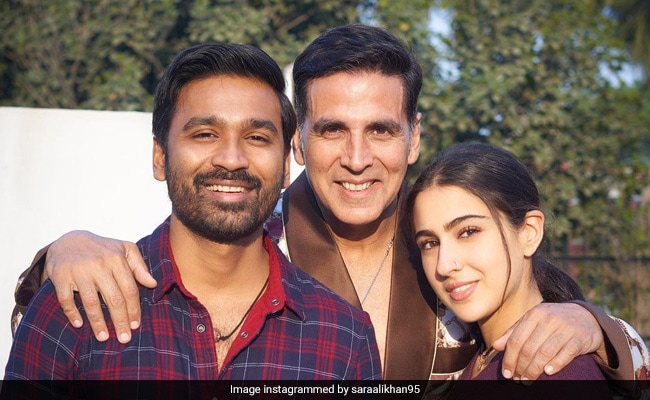 Akshay Kumar, Sara Ali Khan and Dhanush concluded shooting for the final schedule of Atrangi Re on Saturday. The actress wrapped the film with a heartwarming note for her co-stars and director Aanand L Rai. Sara shared a couple of pictures of herself, Dhanush, Akshay Kumar and Aanand L Rai from the sets of the film on her Instagram profile. She wrote: "That's a film wrap... Ek saal baad...Thank you so much Aanand L Rai sir for giving me this role, this film and this opportunity. But more than that thank you for your unconditional love, unwavering support, the best India darshan, delicious khana, early morning sunrise drives to location, sufi ginger water evenings, and the most memorable year with the best team.

"Dhanush, thank you for always being helpful, motivating and inspiring. Couldn't have asked for a better partner in this journey and yes thank you for introducing me to your amazing music and mouth-watering varieties of South Indian food (even though we could've avoided that indulgence during shoots. And thank you so much Akshay sir for bringing so much love, laughter, energy and positivity on our set and sorry for stalking you for photos in all our costumes sir," she added.

The shooting for Atrangi Re began in March last year. The music for the film has been composed by AR Rahman.

On Saturday, Akshay Kumar also shared a thank you note for his co-stars by sharing his first look photo from the film. "It's the last day of #AtrangiRe and I can't wait for you'll to experience the magic created by Aanand L Rai," he wrote and added: "Also a big thank you to my co-stars Sara Ali Khan and Dhanush for letting me be a part of this beautiful film."

The release date of Atrangi Re has not been revealed yet.