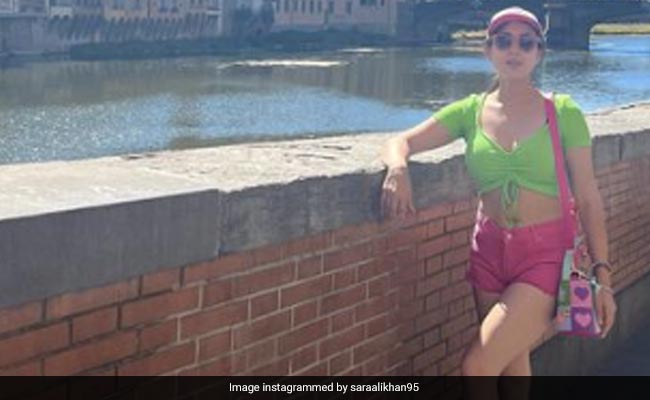 Sara Ali Khan loves to travel and this has been established aplenty by the actress on social media. Whether it is India or an exotic foreign country, the actress loves to explore new destinations. And while she does enjoy her solo trips, Sara also often travels with her friends and family. Now, the actress has made a quick trip to Florence in Italy with her mother, actress Amrita Singh and celebrity stylist Tanya Ghavri. On Tuesday, the actress shared a bunch of images in which she is seen with her mother and Tanya. Dressed in a green crop top and a pair of pink shorts, the stars seems to be embracing the summer in Italy.

Sharing the images, Sara Ali Khan quoted a passage from the novel Dombey And Son by Charles Dickens and said, “And the voices in the waves are always whispering to Florence, in their ceaseless murmuring, of love – of love, eternal and illimitable, not bounded by the confines of this world, or by the end of time, but ranging still, beyond the sea, beyond the sky, to the invisible country far away!”

Earlier this month, Sara Ali Khan spent some quality time with her family in London, United Kingdom. She shared an image with her brothers Ibrahim and Jeh as well as her father Saif Ali Khan. In the caption, she said, “Keeping up with the Pataudi's…”

That was not the only post from London that Sara Ali Khan treated fans to. She preceded that with another set of images in which she is seen with Ibrahim and their friends. In the caption, she said, “Summer vibe. With my tribe. Kindly like, share and subscribe.”

Even while on vacation, Sara Ali Khan does not skip the gym. Need proof? Take a look at this post which she captioned: “You don't take a holiday from work out, you holiday TO work out!”

On the work front, Sara Ali Khan was last seen in Atrangi Re! alongside Dhanush and Akshay Kumar.