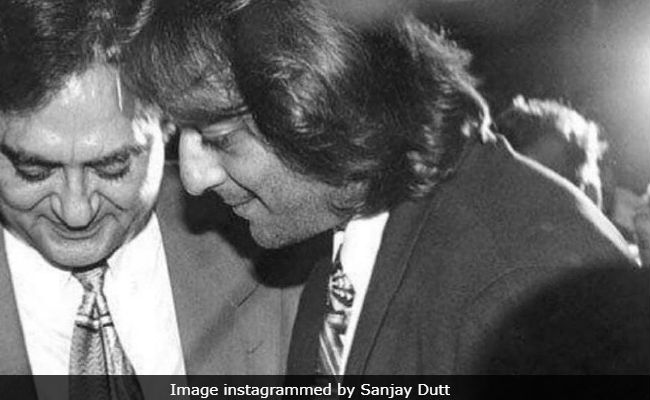 New Delhi: On Sunil Dutt's death anniversary today, his actor son Sanjay Dutt shared a throwback photo of himself with his father with a caption that will make you well up. "Wish you could see me as a free man. Love you... Miss you," the 58-year-old actor wrote. Sunil Dutt died on May 25, 2005, one year before Sanjay Dutt completed his jail term in connection with the 1993 Bombay blasts case. Sunil Dutt, one of the most sought-after actors of the Sixties and the Seventies, died of heart attack at 75 at his home in Bandra. Sunil Dutt has several critically acclaimed films to his credit, including Mujhe Jeene Do, Khandan, Yaadein (which he also directed), Milan and Mother India.

Sanjay Dutt is Sunil Dutt and Nargis' only son. His sister Priya Dutt is a politician and she's married to Owen Roncon while Namrata Dutt is married to former actor Kumar Gaurav.

Promoted
Listen to the latest songs, only on JioSaavn.com
A biopic on Sanjay Dutt is all set to open in theatres next month, in which Paresh Rawal will play the role of Sunil Dutt. Recently, actor Aamir Khan revealed that he turned down the offer to play Sunil Dutt's role in the biopic, which features Ranbir Kapoor in lead role. "Dutt Saab's role is a fabulous role. There is so much about Sanju's relationship with his father, but Sanju's role is unbelievable. I told Raju that role had won my heart," said Aamir Khan.

The film titled Sanju releases on June 29 while the film's trailer will release on social media on May 30. In Sanju, Manisha Koirala plays the role of Nargis and Dia Mirza stars as Maanyata. The film also features Sonam Kapoor and Anushka Sharma among others.