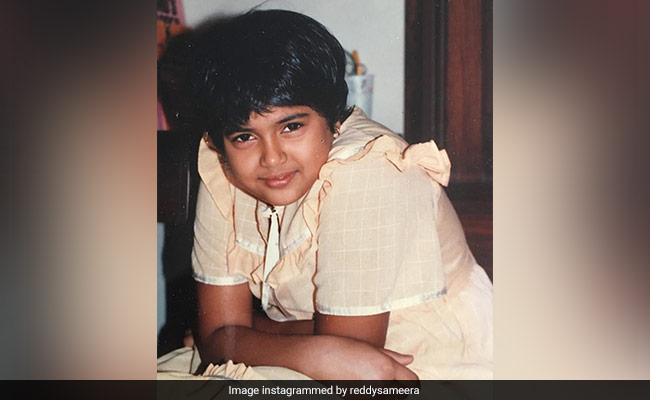 Did you know that Sameera Reddy's "superpowers" during her childhood were her "best frock" and her "boy cut"? Yes, it was, we are not kidding. The actress, making the best use of Throwback Thursday, posted a rare photo of herself from her childhood on her Instagram feed and accompanied it with a quirky caption. In the picture, a much, much younger version of Sameera Reddy can be seen sporting short hair and posing for the camera in a checkered frock. "Fashion model stare like you just don't care," she wrote in the caption and added: "Back when my best frock and boy cut were my superpowers. #throwbackthursday #messymama #rewind."

Sameera Reddy often shares posts about body positivity. Last Thursday too, she picked a photo from hr teenage days and shared that she had a hard time as a teenager because she "stammered and was on the heavier side." The actress added that she will teach her kids Hans and Nyra to be kind to everyone.

She wrote: "Because I had it hard as a teenager who stammered and was on the heavier side, I will teach my kids to be kind and more tolerant and accepting of all differences. Not everyone is the same. It was very hard to go beyond the hurtful comments I would receive and I wish I could tell this young girl that she was more than perfect. But looking back haven't we created a world of perfection and high standards to live upto? Are we sending our kids into that same space? I'd like to believe we are more mindful, conscious beings who are compassionate."

Sameera Reddy married Akshai Varde in a traditional Maharashtrian wedding in 2014 and the couple welcomed Hans Varde in 2015 and Nyra in 2019.

Meanwhile, check out a few adorable pictures from Sameera Reddy's present life - with her son Hans and little daughter Nyra.

Sameera Reddy was last seen in the 2013 Kannada film Varadhanayaka.