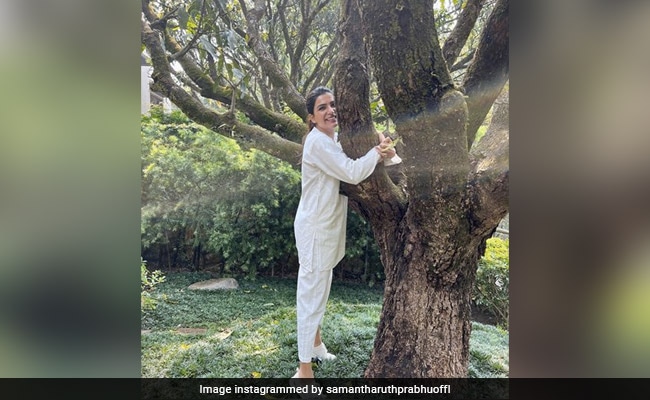 With more than 11 lakh likes, Samantha Ruth Prabhu's latest social media post is going viral on the web. In the photo, Samantha is seen hugging a tree and is dressed in a simple yet stylish white outfit, which she paired with white shoes. With her no-makeup look, and hair tied in a ponytail, the Family Man 2 actress is looking beautiful. Samantha Ruth Prabhu captioned the photo as "Free hugs." Actress Raashi Khanna commented, "Awww," followed by a green heart emoji. Fans have filled the comment section with love-struck, lit, and red heart emojis.

Check out the photo below:

A few days back, Samantha Ruth Prabhu attended Critics Choice Film Awards and was dressed in a green and black dress. She was trolled for her look and later, Samantha lashed out at trolls with a strong note. Her note reads, "As a woman, I bear firsthand knowledge of what it means to be judged. We judge women based on what they wear, their race, education, social standing, appearance, skin tone and the list goes on and on. Making snap judgements about a person simply based on the clothes they wear is quite literally the easiest thing one can do."

"Now that we're in the year 2022 - can we finally stop judging a woman based on the hemlines and necklines she adorns and focus instead on bettering ourselves? Turning that judgement inward and training it on one's own self is evolution. Projecting our ideals on someone else never did anyone any good. Let's gently rewrite the way we measure and understand a person," concluded Samantha.

On the work front, Samantha Ruth Prabhu will next be seen in Vignesh Shivan's Kaathu Vaakula Rendu Kadhal. She will also be seen in Shakuntalam.