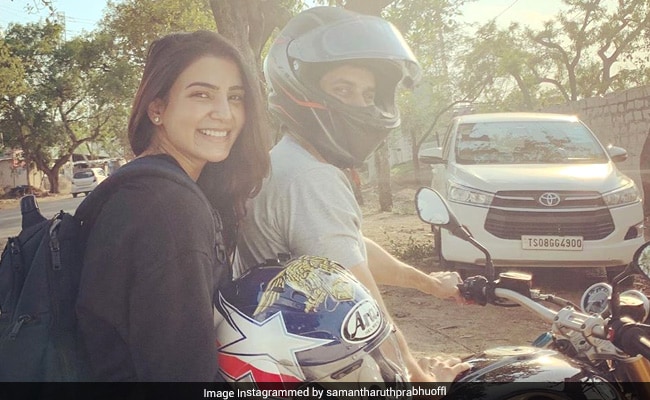 Samantha Ruth Prabhu, who was just dreaming of adventures, embarked on one - to get essentials for the house during the lockdown is nothing less than an adventure. On Friday, Samantha went on an errand run with her husband, actor Naga Chaitanya. Samantha, who was riding pillion on Naga Chaitanya's bike, shared a glimpse of their stepping-out-of-the-house look on Instagram with just the bread emoji as caption. Samantha, dressed in a full sleeve sweatshirt and black pants, carried a backpack while Naga Chaitanya was his usual cool self in casuals. Looks like the smile on Samantha's face is partly because of anticipating the smell of fresh bread and partly because of having stepped out of the house for a change.

Going to get bread with Samantha and Naga Chaitanya be like...

A post shared by Samantha Akkineni (@samantharuthprabhuoffl) on May 15, 2020 at 1:36am PDT

On Tuesday, Samantha shared a throwback memory to share how much she has been missing going on trips. Sharing an adorable photo of herself with Naga Chaitanya in a car, she wrote: "Going on a grand adventure... almost." Their pet dog Hash made a special appearance.

A post shared by Samantha Akkineni (@samantharuthprabhuoffl) on May 11, 2020 at 2:55am PDT

Meanwhile, Samantha is mostly found doing this on Instagram - sharing photos of her chilling with Hash.

A post shared by Samantha Akkineni (@samantharuthprabhuoffl) on May 9, 2020 at 10:28pm PDT

A post shared by Samantha Akkineni (@samantharuthprabhuoffl) on May 13, 2020 at 1:46am PDT

Samantha celebrated her 33rd birthday quarantined at home with Naga and Hash on April 28.

Family .... (no points for guessing what I am praying for )

Samantha Ruth Prabhu and Naga Chaitanya, co-stars of films like Manam, Ye Maaya Chesave and Autonagar Surya, got married in 2017. The couple had two weddings - one in accordance with South India rituals preceded by a dreamy Christian wedding. Majili remains their last film together.