Salman Khan's Maldives Holiday Is Done But The Pics Aren't. Count The Khans In This One 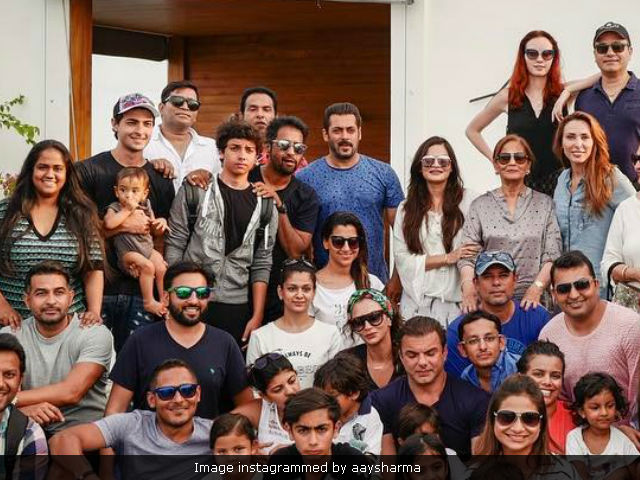 New Delhi: When the Khans sit together for a family picture, it a huge deal and frame. Salman Khan, 51, and his family were on a vacation in Maldives where they celebrated the first birthday of his nephew Ahil, son of his sister Arpita and Aayush Sharma. Aayush shared a picture of the holiday group, which looks like a scene from a Sooraj Barjatya-film and the caption also resonated with the themes of the director's films: "Family that holidays together, stays together." Aayush tagged as many people as he could (thank you for that) but the sheer number of people in a single frame was overwhelming.

Here's the picture of Salman Khan with Ahil's birthday crew. PS: It also includes Iulia Vantur (but you already knew that).

It seems the Khandaan had a gala time in Maldives as their pictures and videos have fun written all over them. Malaika and Amrita Arora, Seema Khan, Arpita and Aayush shared pictures to keep fans updated.

Salman Khan's family reached Maldives a day before Ahil's birthday and celebrated the little one's special day on the beach.

Promoted
Listen to the latest songs, only on JioSaavn.com
Salman joined them later with Iulia Vantur by his side. He was filming Ali Abbas Zafar-directed Tiger Zinda Hai in Austria with Katrina Kaif. The actor made it to Ahil's birthday a little late but we're sure he must have made up for it.

Before Tiger Zinda Hai, Salman Khan will be seen in Kabir Khan's Tubelight which is slated for an Eid release on June 23.