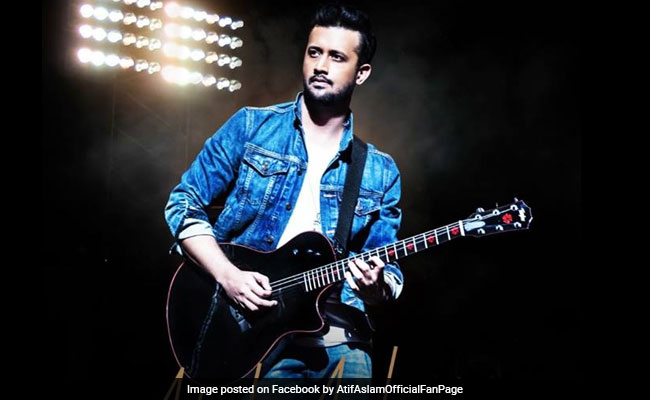 Atif Aslam and Salman Khan have collaborated before (courtesy AtifAslamOfficialFanPage)

Salman Khan and Atif Aslam soared to the top of the trend's list recently after several portals such as Pinkvilla, Times Of India, Times Now, India TV, The Week, DNA and others reported that the 53-year-old superstar has apparently removed one particular song sung by Mr Aslam from upcoming film Notebook. On Monday, a report in Pinkvilla read: "Salman Khan has asked his production house Salman Khan Films to replace Atif Aslam song from Notebook." If reports are to be believed, the timing coincides with that of top film body All Indian Cine Workers Association's (AICWA) ban on collaboration with Pakistani artistes in the light of the dastardly Pulwama attack.

As per the Pinkvilla report, no new singer has been roped in for Notebook and the track sung by Mr Aslam will reportedly be re-recorded in just a few days. Produced by Salman Khan Films, Notebook will mark the Bollywood debuts of Mohnish Bahl's daughter Pranutan and newcomer Zaheer Iqbal. As per a statement released by the film's makers, the team of Notebook will contribute Rs 22 lakh to the families of the soldiers who were killed in the attack. Notebook was extensively shot in Kashmir in the months of October and November of last year.

Atif Aslam has playback credits for hit songs of Salman Khan such as Main Agar from Tubelight, Dil Diyan Gallan from Tiger Zinda Hai, Selfish from Race 3 and Tu Chahiye from Bajrangi Bhaijaan.

Atif Aslam's recent single Baarishein, also featuring Nushrat Bharucha, has been taken down by T-Series from YouTube. Arko, who composed the song, spoke to news agency in a recent interview and said: "I have nothing personal against Atif or any Pakistani talent for that matter because they are artistes like us. I have a problem and I have everything against the Pakistan government and its approach toward handling terrorism that is taking the lives of our people and army personnel."

Meanwhile, as protest against Pulwama attack, Amitabh Bachchan deliberately stalled the shooting of his next project - a commercial, featuring cricketers Virender Sehwag, Harbhajan Singh and Suresh Raina - for two hours in Mumbai on Sunday. Ahead of that, lyricist Javed Akhtar and his actress wife Shabana Azmi cancelled an event they were invited to by the Karachi Art Council. On Monday, Ajay Devgn and Riteish Deshmukh tweeted that the team of Total Dhamaal have decided to not release the film in Pakistan. Around the same time, a notice undersigned by Ronak Suresh Jain, General Secretary, AICWA, also said: "All Indian Cine Workers Association strongly condemns brutal terrorist attack on our soldiers at Pulwama district in Jammu and Kashmir. Our heartfelt condolences to the families of the victims. AICWA stands with nation in confronting such terror and inhumanity."

In another news, videos of Pakistani artiste Rahat Fateh Ali Khan and also Atif Aslam have reportedly been taken down by T-Series on YouTube after Raj Thackeray-led Maharashtra Navnirman Sena (MNS) asked music companies on Saturday to pull out songs of Pakistani artistes from their albums and videos.