Salman Khan and his nephews are giving us major family goals 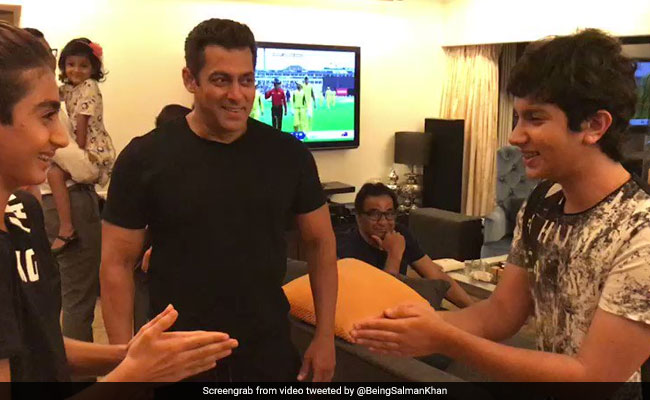 Salman Khan with Arhaan and Nirvaan in a still from the video. (Image courtesy: beingsalmankhan)

Salman Khan managed to scoop some time from his busy schedule he spent his day with his family. The 53-year-old actor has been actively sharing snippets from his fam-jam sessions in the form of videos on social media. On Saturday night, Salman shared several videos on his Instagram profile, in which he can be seen playing red hands with his nephews Arhaan Khan, Nirvaan Khan and Ayaan Agnihotri. The videos are going insanely viral on social media. Nirvaan Khan is the son of Sohail Khan and Seema Sachdev while Ayaan Agnihotri is the son of Atul Agnihotri and Alvira Khan Agnihotri, Salman's sister.

Check out the video shared by Salman Khan here:

Here are some more videos from Salman's fam-jam. Take a look at the videos first, you can thank us later:

On Saturday, Salman shared a super cute video of himself along with his little nephew (Arpita and Aayush Sharma's son) Ahil. Take a look at the video here:

On the work front, Salman Khan is currently basking on the success of his recently-released film Bharat, co-starring Katrina Kaif. The actor's line-up of films includes Dabangg 3, which is the third installment of the Dabangg series. Salman also has Inshallah in the pipeline, in which he will be seen sharing screen space with Alia Bhatt. The film will be directed by Sanjay Leela Bhansali.