Salman Khan On Priyanka Chopra's Exit From Bharat: 'It's OK If She Doesn't Want To Work With Me'

No hard feelings between Salman Khan and Priyanka Chopra over her exit from Bharat? That's what he says 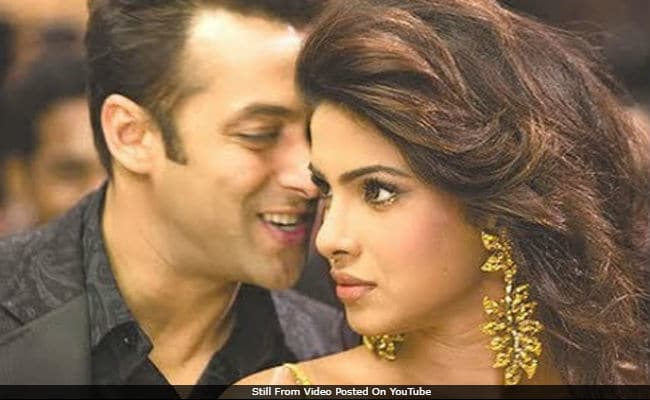 No hard feelings between Salman Khan and Priyanka Chopra over her exit from Bharat? That's what he says - but there does seem to be some unresolved baggage. Speaking at the launch of the trailer of his new production Loveratri, Salman said some rather loaded things about his co-star of several films who, it was announced some days ago, had dropped out of Bharat, which Salman is headlining. News agency ANI reports that superstar, 52, told the assembled press, "Whatever be the reason... if she doesn't want to work with Salman Khan, it's okay" and that Team Bharat would 'never have stopped her' had they known the actress had bagged a big Hollywood film - the film in question is Cowboy Ninja Viking, opposite Guardian Of The Galaxy Chris Pratt.

Salman might insist that 'it's okay' but the terms he couched his sentiment in seemed anything but. Here's the full text of what he said, as reported by ANI: "I am really happy for her. Had we known earlier that she has signed a big film in Hollywood, we would have never stopped her. My shooting had begun. We got to know about her decision of leaving the film at the end moment - just 10 days before her schedule. Priyanka had come home and I told her, 'It's okay if you don't want to do it'. At that time, we were given some other reason. Whatever may be the reason - be it marriage or picture or her not being willing to work in India or with me, it's her reason and we are really supportive about her doing good work. If she does not want to work with Salman Khan, it's okay; she's working with a big hero in Hollywood."

Are we the only ones reading between the lines here?

Priyanka Chopra has remained resolutely silent about speculation over why she quit Bharat, though she did just tell news agency IANS that "Everything about me is not for public consumption. 90 per cent of my life is for public consumption, but 10 per cent of it is for me." Director Ali Abbas Zafar, who announced in a tweet that the actress was no longer in the film, also hinted heavily at the exit hingeing on her rumoured romance with singer Nick Jonas. His tweet, posted some days ago, coincided with reports in international media that Priyanka and Nick were already engaged. The Internet, however, wasn't convinced that the famously professional Priyanka Chopra would walk out of a project because of her personal life. Several reasons were cited and several sources quoted - Priyanka's salary was rumoured to be far below what she had asked for, 'last minute additions' to the cast of Bharat (among them actresses Disha Patani and Nora Fatehi) were reported to be a factor, and as the clincher there was the big Hollywood film with a big Hollywood hero.

As Salman says, 'it's okay.' At the Loveratri event, Salman also thanked actress Katrina Kaif for filling the vacancy. "So, when Priyanka said it's not working out because of whatever reason she gave us, we wished her good luck. And then, we went for Katrina. She is already doing Zero with Shah Rukh Khan, Thugs Of Hindostan with Aamir Khan and another film with Yash Raj Films. With all these films, she said yes to Bharat, because of which we are very grateful to her. She is extremely hard working," Salman Khan said, reports ANI.

Directed by Ali Abbas Zafar, Bharat/i> is slated to hit theatres on June 5 next year.