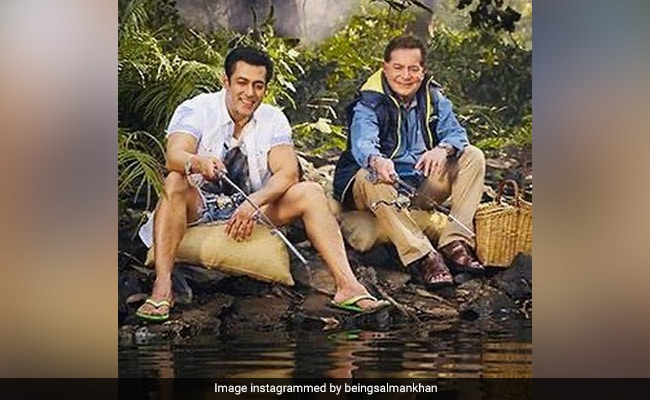 On his father Salim Khan's birthday, Salman Khan posted an adorable wish on his Instagram profile, on Monday. The 53-year-old actor struck gold in his family photo archive and shared a million-dollar throwback picture. In the photograph, the father-son duo can be seen posing with fishing rods and they can be seen smiling with all their hearts. Salman did not reveal when or where the pic was taken but we absolutely loved it. "Happy Birthday Daddy," Salman wrote in his birthday greeting for his father, who turned 84 on Monday.

Take a look at the adorable birthday greeting here:

Salim Khan, who has been given writing credits for super hit films such as Zanjeer, Seeta Aur Geeta and Sholay among many others, is also a father to Arbaaz, Sohail, Alvira and Arpita Khan.

On the work front, Salman Khan is currently busy with the promotional duties of his forthcoming film Dabangg 3, co-starring Sonakshi Sinha and Saiee Manjrekar. The film is slated to release on December 20 this year. The actor will also be seen in Prabhu Deva's Radhe: Your Most Wanted Bhai, alongside Randeep Hooda, Disha Patani and Jackie Shroff. The film went on floors earlier this month and it is scheduled to release on Eid next year. It will be Salman's third project with Prabhu Deva. The duo have previously worked together in films like Wanted (2009) and Dabangg 3.