Salman Khan, Brothers Arbaaz And Sohail Burn Up The Dance Floor At Their Christmas Party 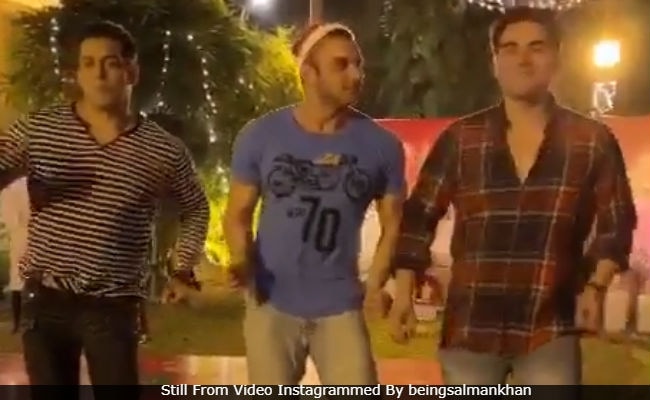 Superstar Salman Khan danced like no one's watching at his Christmas party, hosted last night in Mumbai. In the video shared by Salman on social media, Salman just burnt the dance floor with his moves, along with brothers Arbaaz and Sohail. They matched their steps totally and the dance is nothing less than a treat to watch. At the end, Sohail calls brother-in-law Aayush Sharma on the dance floor. "Merry Xmas to all," Salman captioned the video. Kedarnath producer Pragya Yadav also features in the video. "Cutest dance by all the brothers" and "Best video on Xmas" are some of the comments on Salman's video, which has got over 27 million views.

Salman hosted a star-studded Christmas party, which, apart from his family, was attended by celebs like Karan Johar and his twins Roohi and Yash, Shah Rukh Khan's son AbRam, Katrina Kaif, Tusshar Kapoor and his son Laksshya, Amrita Arora and many others.

Meanwhile, for Salman Khan, who will turn 53 on Thursday, a grand birthday party has reportedly been planned at his farmhouse in Panvel.

On the work front, Salman Khan is currently occupied with the shoot of Bharat and Bigg Boss 12, which he hosts. The finale is scheduled for December 30. In Bharat, directed by Ali Abbas Zafar, Salman co-stars with Katrina Kaif, Disha Patani and Tabu. The film is slated to release on Eid 2019.

Salman also announced Dabangg 3, which will be directed by Arbaaz Khan.