Read inOther Languages
This Article is From Mar 26, 2019

Salman Khan and Venkatesh's dance-off of sorts ended with an epic hug! 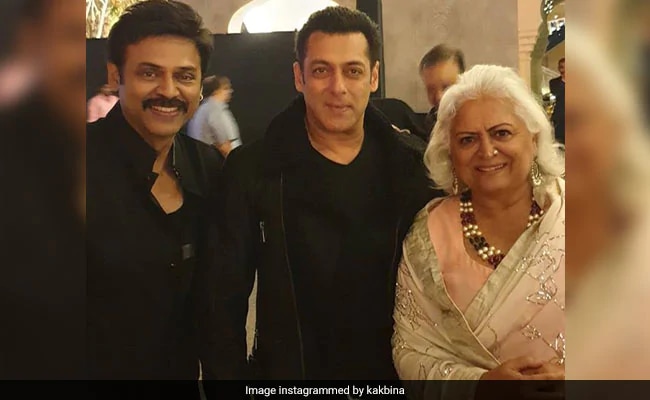 Salman Khan livened up the wedding festivities of South star Venkatesh Daggubati's elder daughter Aashritha in full Bollywood style and we're here to tell you how that happened! The 53-year-old superstar, who attended the close-knit wedding in Jaipur, was spotted in photos on veteran actress Bina Kak's Instagram but that's not why he's trending at the moment. Videos of Salman and Venkatesh dancing their hearts out to Jumme Ki Raat from Salman Khan's movie are giving fans a real 'kick.' The video begins with Venkatesh and Salman grooving in their own styles while they suddenly break into the hook steps of Jumme Ki Raat as soon as the music is turned up.

Here's Salman and Venkatesh dancing for you:

Looks like the dance-off of sorts ended with an epic hug!

While Aashritha's wedding was a strictly guarded affair, Bina Kak treated us to some photos from the functions. We spotted the bride's first cousin actor Rana Daggubati (son of Suresh Babu) in one of the photos while Salman and Venkatesh were also spotted posing together. South stars Naga Chaitanya (Aashritha's cousin) and his wife Samantha Ruth Prabhu also appeared to attend the wedding.

Aashritha reportedly got engaged to Vinayak Reddy in a close-knit ceremony on February 6 in the presence of their family members and close friends at Venkatesh Daggubati's home in Hyderabad. Aashritha Daggubati is a baker and food blogger. Her Infinity Platter has a massive following across various social media platforms, including Facebook and Instagram. Vinayak Reddy is the grandson of R Surender Reddy, the Chairman of Hyderabad Race Club.