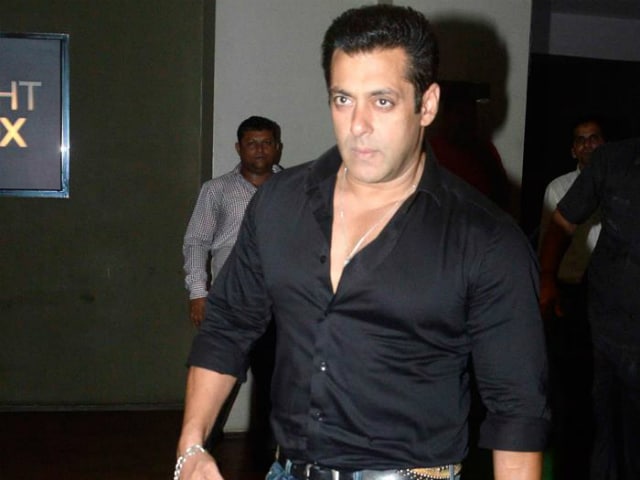 New Delhi: As one-third of the Khan trifecta of Bollywood, actor Salman Khan occupies a hard-won position at the very top of the filmy pecking order. Now 49-going-on-50, Salman has been responsible for some of the industry's biggest profit margins. He has also been found not guilty in a hit-and-run case dating from 2002 by the Bombay High Court, a decision that concludes a blockbuster year for the actor on every front.

It all began 25 years ago with 1989's Maine Pyar Kiya. The Sooraj Barjatya-directed blockbuster starred the-then 24-year-old son of Sholay writer Salim Khan and his first wife Salma. The young Salman had appeared in a supporting role in Biwi Ho To Aisi the year before, but it was Maine Pyar Kiya that propelled him overnight into the stratosphere of stardom. His debut as Bollywood hero, and his first tryst with the screen moniker Prem that was to become inextricably part of his Bollywood identity, earned the actor the Filmfare Award for Best Male Debut.

Over the next few years, Salman Khan's career graph careened through highs and lows. He delivered triumphs in films like 1991's Saajan, 1994's Hum Aapke Hain Koun, 1995's Karan Arjun, and 1999 hits Hum Dil De Chuke Sanam and Hum Saath Saath Hain. During the Nineties, he also starred in the obscure Veergati, Kurbaan, Nishchaiy, Chand Ka Tukda and other forgotten films. Even the now-cult classic Andaz Apna Apna, with Salman and Aamir Khan playing a pair of hilarious slackers, was a box office flop when it released.

The new millennium was a rinse and repeat of the Nineties story. He balanced hits like Wanted, Tere Naam, No Entry and Partner with turkeys like Lucky: No Time For Love, Jaan-e-Mann, Heroes, Marigold, Yuvvraaj and Veer. In fact, the hits were infrequent and punctuated with long periods of decline. Until Wanted and Dabangg revived his box office fortunes in 2009 and 2010, Salman Khan's career seemed to be in dire need of the kiss of life.

Luckily for him, the blockbuster Dabangg and his own crowd-pleasing performance as alpha cop Chulbul Pandey helped Salman claw his way back to being top dog. From this position atop the box office Everest, he has ruled Bollywood ever since with every film released after Dabangg bringing in over Rs 100 crores - Ready and Bodyguard in 2011; Ek Tha Tiger and Dabangg 2 in 2012; last year's Kick was his top earner so far, and even the reviled Jai Ho limped past the finish line.

On-screen, Salman can do no wrong - literally, because his trademark role is the defender of the oppressed and nemesis of the wicked. Off-screen, however, he has repeatedly been in trouble with the law. In May, he was handed a five-year sentence in a hit-and-run case, then had the sentence suspended by the High Court and was finally acquitted of all charges in December. He is also accused of hunting endangered blackbuck deer while filming Hum Saath Saath Hain in Rajasthan in 1998. In a related case, he is accused of illegally owning and using arms in the poaching case.

Salman Khan is also, at almost 50, Bollywood's most eligible bachelor. His chequered love life has seen relationships with Hum Dil De Chuke Sanam heroine Aishwarya Rai, former model and beauty queen Sangeeta Bijlani and Pakistani actress Somy Ali. He is also reported to have dated actress Katrina Kaif, who remains a close friend, and Romanian model Iulia Vantur, who he may or may not still be with. (Also Read: Salman Khan's Midnight Rendezvous With Rumoured Girlfriend Iulia Vantur)

He may have had no luck romantically but Salman commands a high degree of respect and friendship in Bollywood. He has mentored several young actors including Arjun Kapoor and Sooraj Pancholi, and is responsible for the debuts of actresses like Sonakshi Sinha and Daisy Shah. He has formed close friendships with actors like Aamir Khan and Sanjay Dutt, and concluded a public six-year feud with Karan Arjun co-star Shah Rukh Khan in 2014.

Salman, who runs an NGO called Being Human, is part of a large and very close knit family that includes, apart from his father and mother, stepmother Helen; brothers Arbaaz and Sohail; their wives Malaika and Seema; sisters Alvira and Arpita; and their husbands Atul Agnihotri and Aayush Sharma. His sisters often accompany him to his court appearances.