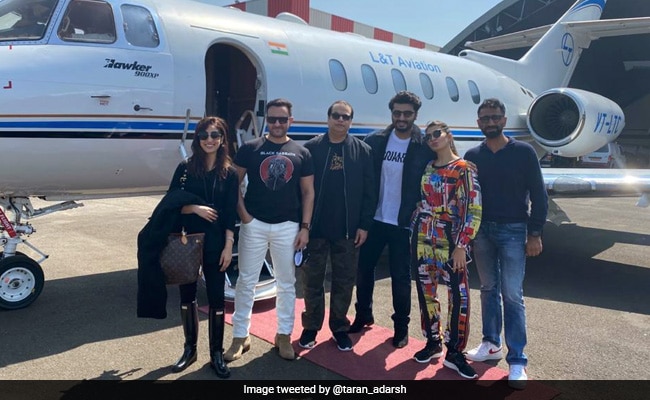 Saif Ali Khan, Arjun Kapoor, Jacqueline Fernandez, Yami Gautam and other members of team Bhoot Police flew to Dalhousie, Himachal Pradesh, on Saturday to shoot their film. Sharing pictures of the actors with director Pavan Kirpalani and producers Ramesh Taurani and Akshai Puri, trade analyst Taran Adarsh wrote: "All set for Dalhousie... #SaifAliKhan, #ArjunKapoor, #JacquelineFernandez and #YamiGautam leave for #Dalhousie for the shoot of horror-comedy #BhootPolice." In one of the pictures, the stars can be seen posing outside a chartered plane. The other one features them wearing masks and posing at a private airport in Mumbai. Check out the photos here:

ALL SET FOR DALHOUSIE... #SaifAliKhan, #ArjunKapoor, #JacquelineFernandez and #YamiGautam leave for #Dalhousie for the shoot of horror-comedy #BhootPolice... Directed by Pavan Kirpalani... Produced by Ramesh Taurani and Akshai Puri. pic.twitter.com/kdpMXudW3J

Bhoot police will mark Saif Ali Khan's first film with Arjun Kapoor and Yami Gautam. He has previously worked with Jacqueline in Race 2.

Earlier, in an interview with Mumbai Mirror, director Pavan Kirpalani said this about the film: "We are excited to bring this spooky adventure-comedy and really happy to have Saif and Arjun join the team as they are a perfect fit for this crazy entertainer. Both of them will be seen in very different avatars and will bring their trademark humour to the script."