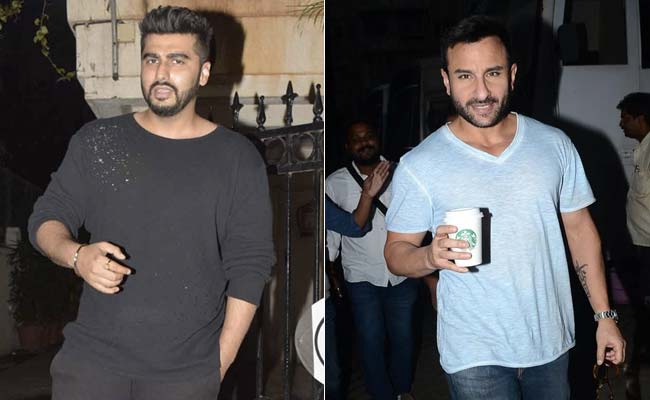 File photos of Arjun and Saif in Mumbai

Actors Saif Ali Khan and Arjun Kapoor are all set to collaborate for the first time for new film Bhoot Police. Last year, Bhoot Police was announced with a cast comprising Saif Ali Khan along with Fatima Sana Shaikh and Ali Fazal. Over a year later, the new cast of Bhoot Police appears to include simply Saif with Arjun as the new addition, reported trade analyst Taran Adarsh. "It's official. Saif Ali Khan and Arjun Kapoor in horror-comedy Bhoot Police. The duo will share screen space for the first time. Directed by Pavan Kirpalani. Produced by Ramesh Taurani and Akshai Puri. Filming begins 2020 end," Mr Adarsh wrote in a post. Saif and Arjun will reportedly play a team of two ghostbusters in the movie.

IT'S OFFICIAL... #SaifAliKhan and #ArjunKapoor in horror-comedy #BhootPolice... The duo will share screen space for the first time... Directed by Pavan Kirpalani... Produced by Ramesh Taurani and Akshai Puri... Filming begins 2020-end.

Meanwhile, in an interview with Mumbai Mirror, director Pavan Kirpalani described the movie as a "spooky adventure-comedy" and said: "We are excited to bring this spooky adventure-comedy and really happy to have Saif and Arjun join the team as they are a perfect fit for this crazy entertainer." The director added that Bhoot Police will feature Arjun and Saif in never-seen-before avatars: "Both of them will be seen in very different avatars and will bring their trademark humour to the script. Pavan Kirpalani has helmed films such as Phobia and horror film Ragini MMS.

In the past, Saif Ali Khan has starred in a zombie movie titled Go Goa Gone. He was last seen in Jawaani Jaaneman after which he featured in a cameo in Dil Bechara. Saif Ali Khan also has Bunty Aur Babli 2 in his line-up. Arjun Kapoor was last seen in Panipat and his upcoming movies include Sandeep Aur Pinky Faraar.

The Many Moods Of Jennifer Lopez. Green With Envy Already?