Saif Ali Khan, Amrita Singh And Little Soha, Once Upon A Time In Bollywood 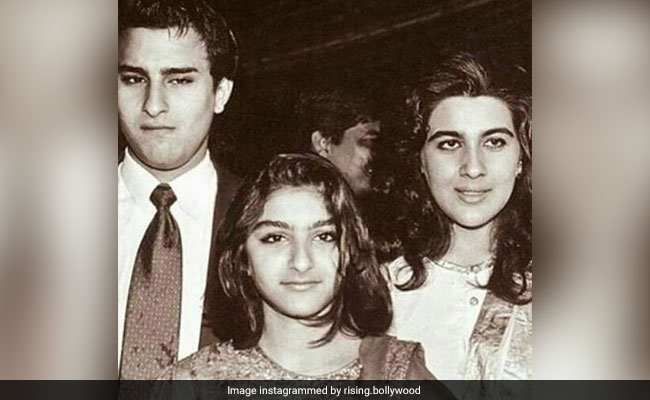 This pic of Saif, Amrita and Soha has been shared by fan-clubs (courtesy rising.bollywood )

Every now and then, priceless throwback photos make their way to social media. Recently, a monochrome click of Saif Ali Khan and his ex-wife Amrita Singh along with a much, much younger version of Soha Ali Khan is being shared by fan-clubs, sending the Internet into a tizzy. In the photo, Saif, in a suited look, poses with Amrita Singh, dressed in salwar-kameez, with Soha in between them and comments on Instagram made certain observations of their own - Soha in the photo apparently resembles Saif and Amrita's son Ibrahim. Saif Ali Khan and Amrita Singh were a much talked about showbiz couple when they married in 1991 - Saif was 21 at that time and Amrita was 33. Saif and Amrita, who are also parents to actress Sara Ali Khan, divorced in 2004.

Saif married actress Kareena Kapoor in 2012 and the couple are parents to a son named Taimur, who will celebrate his 3rd birthday in December this year.

The teenaged Soha Ali Khan in the photo grew up to become an actress. She fell in love with actor Kunal Kemmu on the sets of 2009 movie Dhoondte Reh Jaaoge and got married in 2015 and the couple have a daughter named Inaaya, who is nine months younger to Taimur.

Take a look at the blast from the past year.

On an episode of Koffee With Karan, Sara Ali Khan said she shares brilliant rapport with Kareena Kapoor, who on another episode revealed she's "never met" Amrita: "I met Saif many years after he got divorced. So, it was not on anyone's time. He was clearly single."

Sara and Ibrahim, who live with their mother, are often spotted hanging out with Kareena, Taimur, Soha, Kunal and Inaaya at Saif Ali Khan's Mumbai residence.