Runway 34 Teaser: Seatbelts On. Ajay Devgn Is In Control Or Is He?

Runway 34 Teaser: Amitabh Bachchan plays what seems to be an investigative officer of some sort. 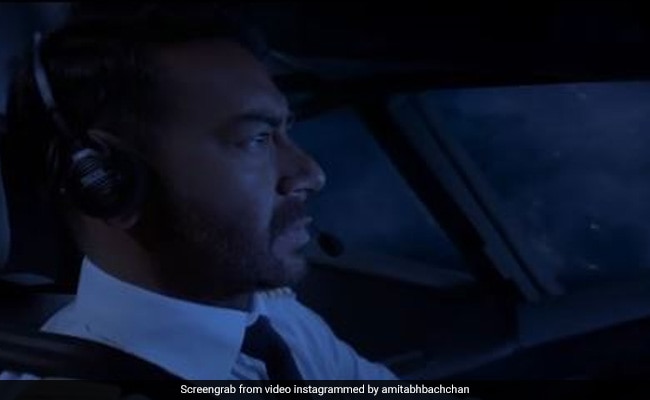 The teaser of upcoming film Runway 34 released today and it promises to be a thrilling if bumpy ride. The 48-second clip opens with visuals of a plane flying in stormy weather; in the cockpit are Ajay Devgn and Rakul Preet. "It is impossible to land here," radios air traffic control; "Hume koi aise information nahi mila (we have received no such information," responds a tense Ajay, at the control of the beleaguered plane. The teaser then cuts to Amitabh Bachchan who intones in his famous baritone, "Gurutwa aakarshan or the law of gravity." What goes up must come down and at the same speed, he explains. Unlike Ajay Devgn – who directs the film - and Rakul Preet's characters, it is not immediately clear from the teaser what role Big B plays in Runway 34 – he appears to be an investigative officer of some sort.

The cast of the film release the teaser of Runway 34 with the tagline: "The truth is hidden 35,000 feet above the ground." The trailer of the film, earlier titled MayDay, will release on March 21.

Runway 34 is based on real events, believed to be a 2015 incident in which a Jet Airways flight from Doha to Kuwait only just managed to navigate poor weather and low visibility. The release of the film's teaser was preceded by a blitz of motion and still posters.