Rohit Shetty On Simmba: 'The Film Will Make Audience Happy And Cry At The Same Time' 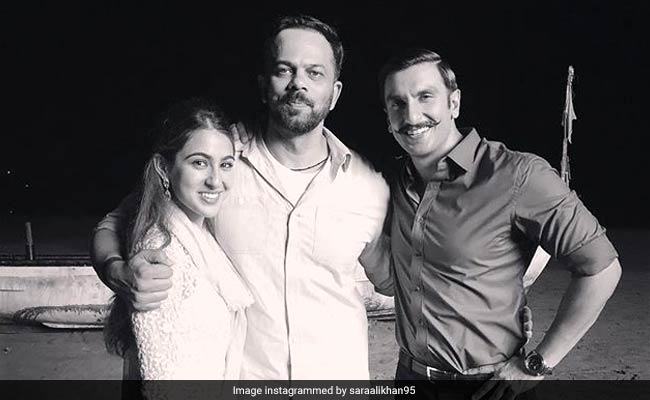 Rohit Shetty with the cast of Simmba (Image courtesy saraalikhan95)

Filmmaker Rohit Shetty, whose directorial next Simmba hits the screens tomorrow, in an interview to news agency IANS said that the Ranveer Singh and Sara Ali Khan starrer will make the audience "happy and cry at the same time". "I am not saying that we have created something different but this film will give you a high. The film will make you happy and cry at the same time," IANS quoted the 45-year-old filmmaker as saying. Speaking about his film, Rohit Shetty added: "I think we have made a good film. I make films every year. Last year, Golmaal Again was released."

Rohit Shetty's Simmba is a cop drama in which Ranveer Singh plays the role of a policeman Sangram Bhalerao while Sara Ali Khan plays his love interest. Speaking about his film further, Rohit Shetty added that Simmba is an "on beat" film much like Chennai Express, Golmaal Again and Singham. "I am not one of those filmmakers who make one film in four years but there are few films like Chennai Express, Golmaal 3, Golmaal Again and Singham that you know that it's an on beat film and it has been made the way we wanted it to make so, Simmba is one of them."

Meanwhile, Sara Ali Khan, who made her Bollywood debut with Kedarnath earlier this month, is collaborating with the actor-director duo for the first time. Of how Sara came on board for Simmba, Rohit Shetty said: "Nobody approached Sara. She approached (us) herself. She literally cooked my brain by messaging me so many times. Sara happened because of Gattu (Abhishek Kapoor, director of Sara's debut film) because he also called me and asked me to cast Sara! He took the initiative and told me to watch some footage of Kedarnath that they had already shot. Then I saw it and called her."

Simmba will be Ranveer Singh's first film after his wedding to Deepika Padukone last month. Deepika along with Ranveer's parents watched the special screening of Simmba on Tuesday. When Ranveer was asked about Deepika's reaction after watching the film, this is what he said: "She is very proud of me and as well as Rohit (Shetty) sir. She gave so many compliments to Rohit sir. So, I felt that should praise me as well."