"If you ever wondered what it was like to be able to work with the great Martin Scorsese, this is your chance," said Leonardo in an Instagram video 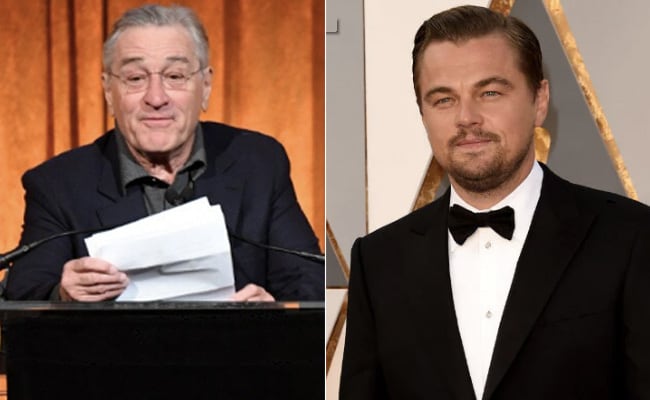 The actors are set to star in Killers Of The Flower Moon. (Image courtesy: AFP)

Leonardo DiCaprio and Robert De Niro have rallied fellow Hollywood A-listers in a new coronavirus fundraising campaign by offering a walk-on role in their upcoming film to one lucky donor. The actors are set to star in Killers Of The Flower Moon, one of next year's most hotly anticipated movies, which is directed by Martin Scorsese and tells the true story of Native American killings in 1920s Oklahoma. "If you ever wondered what it was like to be able to work with the great Martin Scorsese, this is your chance," said Leonardo DiCaprio in an Instagram video Wednesday. The randomly selected winner will also have lunch with the stars and director, and attend the premiere.

The initiative is part of the #AllInChallenge launched Tuesday, which sees celebrities including movie and sport stars auction or donate a "once-in-a-lifetime fan experience," and challenge others to do the same. Opportunities to have Justin Bieber fly to your house for a private show, watch a Los Angeles Lakers basketball game ringside with Magic Johnson, or play golf with Rob Lowe have collectively raised $4 million so far. Organizers hope to raise $100 million.

All proceeds go to charities providing food relief to those in need during the lockdown, including Meals on Wheels, No Kid Hungry and America's Food Fund - launched this month by Leonardo DiCaprio and Laurene Jobs, the widow of Steve Jobs.

In his video Leonardo DiCaprio challenged Ellen DeGeneres, who within hours responded by offering a chance to co-host her chat show, and Matthew McConaughey, who invited a donor to join him in his private box to watch an American Football game in Texas.

The campaign is the latest in a series of high-profile celebrity initiatives over the deadly coronavirus pandemic, from singer Rihanna's multi-million-dollar donations to Twitter CEO Jack Dorsey's new $1 billion relief fund.