RRR is SS Rajamouli's first project after the 2017 blockbuster Baahubali 2: The Conclusion 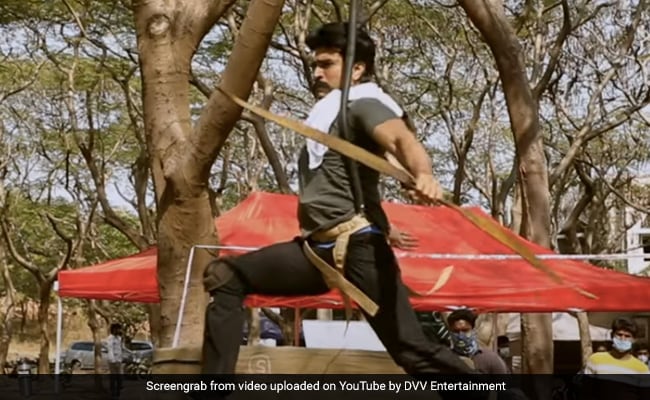 RRR: A still from the making of the film. (courtesy YouTube)

A quick glance through today's Twitter feed will show the hashtags #RRR and #RoarOfRRR on the top of the trends list. The reason is simple - the makers of the film RRR shared an update on the movie and fans can't keep calm. The makers shared a brand new video called 'Roar Of RRR,' which documents the process of the making of SS Rajamouli's magnum opus. The makers described the video as "the effort behind creating the ultimate theatrical experience." The video can be best defined as almost two minutes of sheer cinematic brilliance, what with grand sets, high-octane action sequences, nail-biting moments as powerful rap by Blaaze plays in the backdrop. Not to mention glimpses of the impressive star cast that RRR boasts of, which includes Jr NTR, Ram Charan, Ajay Devgn, Alia Bhatt, Olivia Morris, Samuthirakani, Alison Doody, Ray Stevenson. NTR and Ram Charan's action sequences that they performed sans bodydoubles clearly stand out. Simply put, we can't wait to see SS Rajamouli's vision on screen.

Check out Roar Of RRR here, you can thank us later:

The multilingual project will hit the screens on October 13 this year. RRR, set in the 1920's is a "fictitious story based on two legendary freedom fighters - Alluri Seetharamaraju and Komaram Bheem."

It is Rajamouli's first project after the 2017 blockbuster Baahubali 2: The Conclusion, which was a massive success. The film will release across the globe in Hindi, Tamil, Telugu and Malayalam simultaneously. RRR was earlier slated to release on July 30, 2020. However, the film's shooting was halted due to the pandemic and the film's director SS Rajamouli had contracted the virus last year. The film's lead actors Ram Charan and Alia Bhatt too had tested positive for COVID-19.