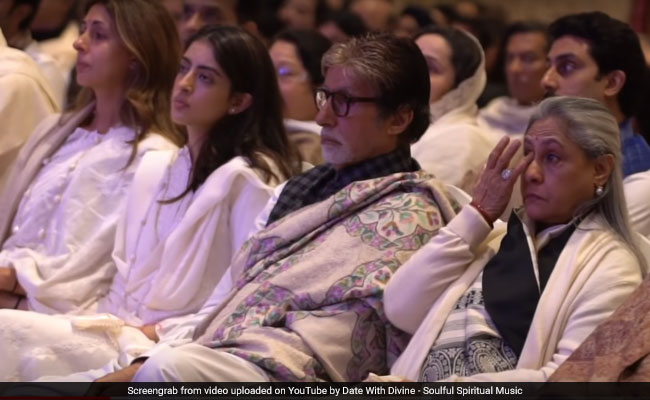 Family and friends of the Kapoors and the Nandas', including the Bachchans, attended the prayer meeting of Ritu Nanda, Raj Kapoor's elder daughter, in New Delhi recently. A video, sharing glimpses from inside the prayer meet, have been shared by Delhi-based singer Ankit Batra on his YouTube channel, who added to the emotional atmosphere of the prayer meeting with a melancholy rendition of Raj Kapoor's song Jeena Yahan Marna Yahaan from Mera Naam Joker. Ritu Nanda, sister of Rishi, Randhir, Rajiv and Rima Kapoor, was married to industrialist Rajan Nanda. They have a daughter, Nitasha, and a son, Nikhil, who married Amitabh Bachchan's daughter Shweta in 1997. Ritu Nanda was the grandmother of Shweta and Nikhil's children Navya Naveli and Agastya.

The video begins with Amitabh Bachchan's heart-felt tribute to Ritu Nanda and wraps with Rishi Kapoor remembering his sister with a heart-felt memory and thanking guests for paying their respects to her.

Abhishek Bachchan had flown in to along Haridwar along with Nikhil Nanda, Agastya and Navya Naveli to immerse Ritu Nanda's last remains.

Will miss you dearly

Ritu Nanda died in the early hours of January 14. Ritu Nanda was 71 and, according to news agency IANS, had been battling cancer for seven years. Ritu Nanda's funeral was attended by Abhishek Bachchan, Rishi Kapoor, daughter Riddhima Kapoor Sahni, Randhir Kapoor and Kareena Kapoor and others in the national capital. Amitabh Bachchan and Aishwarya Rai Bachchan had flew into Delhi to meet the Nandas within hours of Ritu Nanda's death.