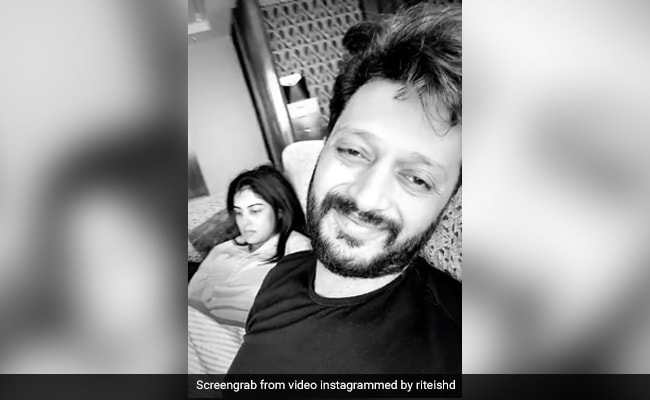 Riteish and Genelia in a still from the video. (courtesy riteishd)

The monsoons are here and our Bollywood celebrities seem to be drunk in love this season. Perhaps, actor Riteish Deshmukh was never out of the season of love in the first place. Who else should he be crooning to other than his wife, actress Genelia D'Souza? These parents of two kids never seem to be too tired to shower love on each other once in a while. In the latest Instagram video, Riteish played Indian band Sanam's rendition of O Mere Dil Ke Chain and showed a morning groggy-eyed face to the camera. However, just when the romantic lines “Dil Tum Ko Hi Chahe To Kya Kijiye” (what can you do if my heart wants you) started, he tilted the camera towards Genelia who was busy scrolling over her phone.

Riteish pulled up this video quite well, with every move falling in step with the beats of the song. We couldn't miss his lovely smile and wink once we saw Genelia by his side. He wrote in the caption, “No shooting morning.” We admit it's a rather understated caption compared to the lovely bonding we see in the clip.

The Dhamaal actor has been sharing such videos with his wife for a while now and fans keep waiting for the next bursts of adoration from the couple. Not even a week ago, Riteish had shared a throwback video where he and Genelia are seen on a boat in Goa, wearing helmets and safety gear, and musing to the Bollywood number Akele Hai To Kya Gam Hai. Surely, Riteish and Genelia are never “akele” (alone) and fans will dismiss any doubts about “gam” (sorrow) in this celebrity relationship.

The couple can warm our hearts. At the same time, they both can get us bursting into peals of laughter with funny twists to their love story. In a video from last month, Riteish and Genelia are sitting in each other's arms. Only, to Riteish's dismay, the arm that he had been kissing turned out to be someone else's. “Quite the handy work,” Riteish wrote in the caption.