Riteish Deshmukh's Anniversary-Special Video With Genelia D'Souza Is Everything

Currently, Riteish and Genelia are in Goa for a vacation. The couple have been married for eight years now 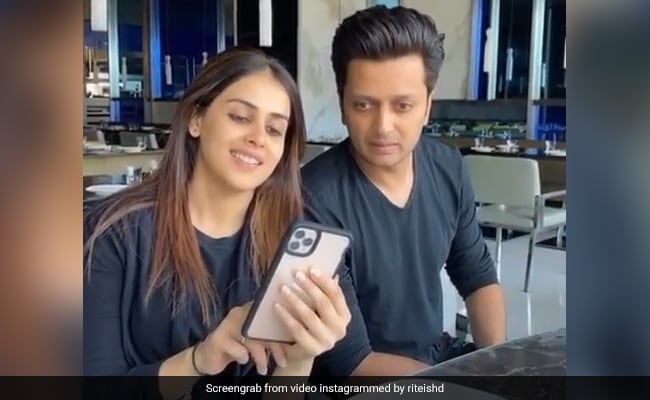 A still from the video posted by Riteish Deshmukh (courtesy: riteishd)

Riteish Deshmukh posted a really cute video with wife Genelia D'Souza as part of their anniversary celebrations today. The couple have been married for eight years now. In the video that Riteish posted on Instagram, Genelia shows her husband some photos on her phone from their wedding. What's funny? Riteish's reaction to these pictures as the background score plays the song "Tum itna jo muskura rahe ho": "Jin zakhmo ko waqt bhar chala hai. Tum kyon unhe chhedhe ja rahe ho." Like any ordinary couple, Riteish Deshmukh can be seen making fun of his married life in the video. The 41-year-old actor has captioned, "Happy anniversary, Baiko."

Take a look at their video here:

Genelia D'Souza also took to Instagram on the occasion of her anniversary with Riteish Deshmukh and shared a video. She has added pictures of herself with Riteish in the video and wrote a caption saying, "Dearest forever, grow old along with me, I promise the best is yet to come. Happy Anniversary Riteish Deshmukh. Just to let you know, I love being my husband's wife. #since2002."

Dearest Forever, Grow old along with me, I promise the best is yet to come Happy Anniversary @riteishd Just to let you know I Love being my Husband's wife . #since2002

Currently, the couple is in Goa for a vacation. Riteish Dekhmukh has posted a video on his Instagram story, showing fans his "Anniversary morning trek," with Genelia.

Riteish and Genelia got married in 2012. However, they have dated each other since 2002. The couple have two sons Riaan Deshmukh, who is 5-years-old and younger one Rahyl Deshmukh, who is three.

On the work front, Riteish Deshmukh is working on his next film Baaghi 3, wherein he will feature alongside lead actors Tiger Shroff and Shraddha Kapoor.