Heres how Rishi Kapoor, Neetu Kapoor, Samara and Riddhima brought the gangster fashion back in style 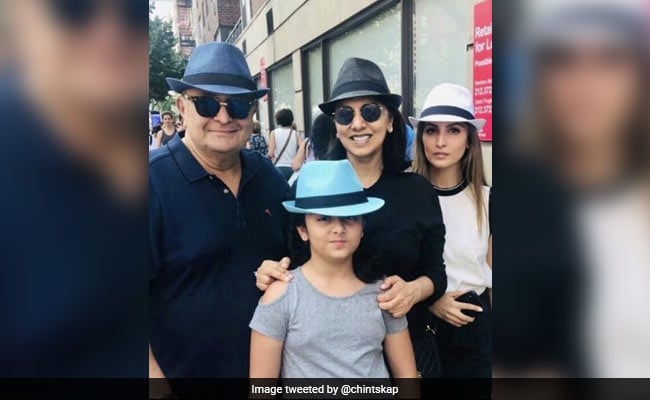 Rishi Kapoor and Neetu Kapoor, who are currently in New York, often have mini fam-jams in Big Apple. The veteran couple were recently visited by their daughter Riddhima Kapoor Sahni and their seven-year-old granddaughter Samara and looks like they had a fabulous day out. Rishi Kapoor, who is gradually making up for his months of hiatus on Twitter, shared an adorable photo of the quartet, twinning in Borsalino fedora hats. Rishi Kapoor tweeted: "Borsalino (fedora/hats in Italian) mobsters in NY. Thank you for coming Riddhima and Samara, love you guys." In the photo, Rishi Kapoor and Neetu Kapoor have maxed out their gangster modes by rocking the kala chashma trend while Samara is probably the cutest "gangster" in a powder blue fedora hat.

In his tweet, Rishi Kapoor appears to make double references - a) to the iconic Borsalino manufactured fedora hats or felt hats, which were a signature wardrobe staple for gangsters in the vintage era b) to the 1970 French gangster drama Borsalino.

Here's how Rishi Kapoor, Neetu Kapoor, Samara and Riddhima brought the gangster fashion back in style:

Borsalino (Fedora/Hats in Italian) Mobsters in NY. Thank you for coming Riddhima and Samara,love you guys pic.twitter.com/PKvhAKoS43

When in New York, Rishi Kapoor is not only paid frequent visits by Riddhima but also by his son Ranbir Kapoor. Alia Bhatt, Ranbir Kapoor's rumoured girlfriend, is also often spotted chilling with the Kapoors in Big Apple.

Rishi Kapoor, who is currently in remission, has been in New York for over nine months for cancer treatment and is expected to return home soon. Rishi Kapoor was last seen in Netflix movie Rajma Chawal.