"I hope and with all your wishes and prayers that he comes back soon," said Ranbir Kapoor 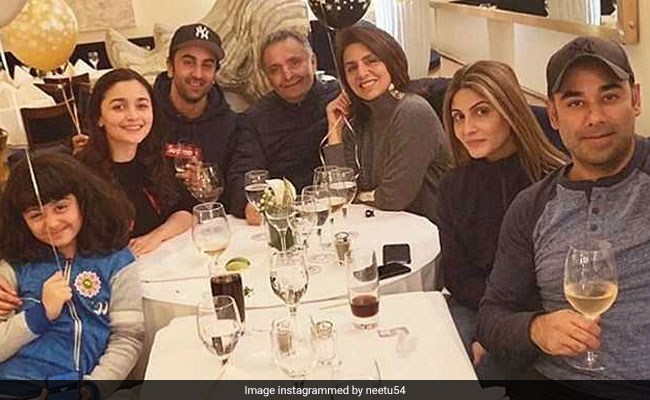 Ranbir Kapoor recently shared an update about his father Rishi Kapoor's current health status and revealed that the 66-year-old actor is "doing very well" and that he "will be back soon," reports news agency PTI. Ranbir, who interacted with the media on the sidelines of the Zee Cine Awards 2019, told PTI: "He is doing very well. He will be back very soon." During the media interaction, Ranbir also stated that his father, who was last seen in the 2018 courtroom drama Mulk, misses working in films."He is missing movies and working in films. I hope and with all your wishes and prayers that he comes back soon," PTI quoted Ranbir Kapoor as saying.

Rishi Kapoor left for the US for medical treatment in September last year. The actor was accompanied by his wife Neetu Kapoor and was frequently visited by members of the Kapoor family. Earlier, there were rumours that Rishi Kapoor was battling cancer. However, his elder brother Randhir Kapoor denied the rumours but he did disclose the nature of his brother's illness.

Ranbir Kapoor frequently visited his father, during his stay in New York. The actor was even accompanied by his rumoured girlfriend and Brahmastra co-star Alia Bhatt and they spent the New Years together.

Sharing Rishi Kapoor's health update, a source close to the family, earlier told news agency IANS: "Rishi is homesick and very eager to return home. They have a wedding to plan and he's counting the days. But he's not ready yet to return. His treatment is slow but steady. Hopefully, he can come home in a few months. But end of this month? No way!"